By GLENN ASTARITA
January 25, 2015
Sign in to view read count 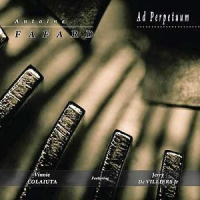 Canadian bassist Antoine Fafard possesses awe-inspiring chops and can seemingly do anything he darn well pleases. Following suit with his previous solo outing Occultus Tramitis (Unicorn, 2013) he aligns his significant wares with highly revered artists, providing the level of support required, not only to pull off the tricky time signatures, but to also add various marks of distinction to these strong compositional frameworks. On his previous outing, drumming heroes Terry Bozzio, Simon Phillips and other marquee names joined the festivities, and here, he employs the talents of extraordinary session drummer Vinnie Colauita and Canadian guitar-slinger Jerry De Villiers Jr. In addition, A-list studio drummer Gary Husband who is enjoying tenure with guitar great John McLaughlin's 4th Dimension unit, teams with Colauita for a mini drumming colossus on "D-Day."

It would have been easy for the bassist to dish out a high-tech chops-fest, given the lineup. Well, there's no shortage of technical acumen, but Fafard's ultimate goal is to focus on sustainable compositions, tendering a holistic and advantageous underpinning for the musicians simmering solo jaunts. Hence, the program is often outlined on flourishing and expansive formulations and guest keyboardist Gerry Etkins' lithe synth lines on the frothy "Riff & Raft" and two other tracks." Moreover, a good portion of these comps proffer memorable themes amid a few unexpected detours and some raging unison passages.

On "D-Day," Colauita and Husband institute an imposing rock pulse, leading to a funky contrast and thorny, odd-metered diversions, topped off by saxophonist Jean-Pierre Zanella's soaring notes. Most of these comps feature Fafard and De Villiers Jr's fluidly scorching lines and acute harmonic sensibilities. And the bassist's dual role as a director of operations and soloist is nicely contrasted by his lyrically rich runs, abetted by super-speed, melodically tinged phrasings. However "The Egg," is an ominously crafted delight, modeled with bursting flurries and the leader's looping notes. Otherwise, Fafard reaffirms that in the proper hands, the jazz fusion or jazz rock genres are not six-feet under, as some might be inclined to believe.