Geggietrio + Donny McCaslin: Across the Sky 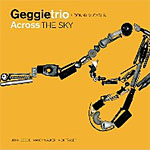 With too many musicians releasing albums as leaders before they're ready, Canadian bassist John Geggie is a refreshing alternative. Waiting until his late forties might, in fact, seem a little overcautious for this central figure on the Ottawa scene, but to compensate—and better demonstrate the breadth of his musical interests—he's released two debuts as a leader, a few scant months apart. Geggie Project (Ambiances Magnétiques, 2009), featuring longtime drummer Nick Fraser and pianist Marilyn Crispell—with whom Geggie has forged an ongoing relationship since first inviting her to perform in his 2003 Geggie Concert Series—is a freer and largely more introspective affair. Across the Sky—a quartet date also featuring Fraser, along with Toronto pianist Nancy Walker and the increasingly ubiquitous saxophonist Donny McCaslin—may be more centrist, but demonstrates equal conversational interplay, making the two projects different yet rooted in a similar musical aesthetic.

In addition to her own solo career and albums like When She Dreams (Justin Time, 2004), Walker has been a member (also along with Fraser) of Geggie's trio at the Ottawa International Jazz Festival's late-night jam sessions for the past several years. The resultant ingrained chemistry makes Across the Sky's seven free improvs—miniatures scattered between Geggie originals as rallying points and transitional mood shifts—feel as though they were preconceived, despite being created completely in-the-moment. Unlike sessions that recruit a bigger name to add some star power, McCaslin is no ringer here; since first playing in the bassist's 2005 Concert Series, he's become an Ottawa regular, also teaching and performing at the annual Jazzworks Jazz Camp, where Geggie is a founding faculty member.

All this meaning that Across the Sky may be a first encounter for this particular quartet, but there's plenty of shared history brought to the table. McCaslin's absolute engagement and full-on commitment combine with Geggie, Walker, and Fraser's empathic interaction to make every track on Across the Sky a winner. His first salvo on the bassist's viscerally swinging opener, "The Eyes are Worth 1000 Words"—bolstered by Geggie, Walker, and Fraser playing like a modern-day version of John Coltrane's classic quartet—is as vital as anything he's done, while the entire quartet delivers with a compelling combination of energy and understatement on the lyrical title track. Throughout, Geggie's writing may be sketch-like—intended to provide a variety of contexts on which the quartet can converse—but it's always as memorable as his playing. On the relaxed, thematically rich "From Which," Geggie's solo explores new melodic possibilities with each passing chorus, while on the dark-hued " Septième Arrondissement," Fraser's elastic time sense fluctuates seamlessly between the suggested and the overt. As for Walker, her motif-driven solo on the propulsive "Or Not" is a highlight of the disc.

Across the Sky may be primarily straight-ahead, but the depth of Geggie's writing, and the quartet's ability to stray into more oblique territory on improvs like the jagged "Ruelles," lends it a broader appeal. Transcending any perceived constraints of the mainstream by combining trust and a sense of adventure, Across the Sky, along with Geggie Project, provides an overdue announcement of one of one of Canada's best kept secrets.

The Eyes are Worth 1000 Words; From Which; Mica; Scatterbrain Drain; Septième Arrondissement; Brume; Ruelles; Or Not; Les Jardins du Luxembourg; Across the Sky; Le Marais; Réflection; Son of a Shoe; Pompidou.