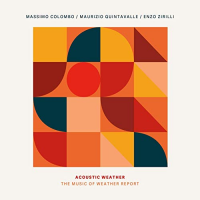 Depending on your point of view, Weather Report either defined or redefined fusion during the 1970s. Their vivid approach and instrumental dynamics were mind blowing back then and still set the bar. Somehow pianist Joe Zawinul and saxophonist Wayne Shorter, always buoyed by a top-notch rhythm section, defied the odds by creating spirited fusion without the sound of an electric guitar that was so prevalent in other fusion bands.

Veteran jazz pianist Massimo Colombo took on the task of paying homage to the music of Weather Report with even less in his hip pocket. The saxophone joined the ranks of the missing on the piano trio record Acoustic Weather. A challenge for sure—but what may have lacked in fullness of sound was met head on with reinvented arrangements of material pulled mostly from Weather Report's Heavy Weather (Columbia, 1977), Black Market (Columbia, 1976) and Mr. Gone (ARC/Columbia, 1978). Colombo chose several of their best-known melodies to work with. That could be problematic if the reinventions were to fall short of their historic mark. The concept, at least to this listener's ear, was to revert fusion back to straight-ahead jazz.

The record starts out with the classic Shorter tune, "Palladium," with the feel of a late fifties jazz trio with perhaps Red Garland or Wynton Kelly at the helm. A song written and driven by the funky and phenomenal bass line of Jaco Pastorius, "Teen Town," has a swing feel to it and is delivered by double bassist Maurizio Quintavalle in a manner more reminiscent of Paul Chambers or Reggie Workman. Enzo Zirilli's brushes provide a gentle yet fulfilling touch. Colombo's ability to keep the original intent and depth of the songs throughout the record is keen, especially when you consider that he is the only soloist. He doesn't try to emulate Zawinul's sound on the keys, opting instead to confidently play the tunes as if they were his own. Zawinul's somber "A Remark You Made" is remarkable in that it is a walk down the identical path, perhaps only at a different time of day. An urgently paced version of Zawinul's "Black Market" adroitly features the strong and supportive rhythm section of Zirilli and Quintavalle. The Shorter classic "Pinocchio" is rendered in bebop fashion while keeping grasp of its unique melodic core. The record concludes by dipping into Weather Report's Sportin' Life (Columbia, 1985), with a soft and tasteful turn on Shorter's "Face on the Barroom Floor."

Colombo is no stranger to tackling the fabric of classic works. In his tribute to the incomparable Bud Powell, Powell To The People (Jazzland DZ, 2018), also with Zirillii and Quintavalle, he successfully captured the essence of Powell's brilliant skillset. Here Colombo again not only demonstrates his own skills as a jazz pianist, but also shows a propensity for truly understanding the character and intangibles of the music he embraces. Zawinul once said of Weather Report something to the effect, "We never solo, we always solo." Daring to put his own stamp on that delicious conundrum, Colombo and his fine trio have presented interpretations that are thought provoking in that they take the listener outside the predetermined box on how to hear these revered songs.