By TYRAN GRILLO
February 26, 2017
Sign in to view read count 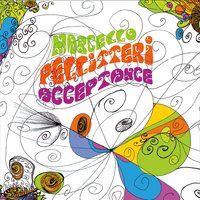 From branches of sadness have sprouted leaves of affirmation, and these are their songs.

As the first in a series of albums dedicated to Marcello Pellitteri's late daughter, Veronica (1991-2014), Acceptance marks a turning point in the renowned drummer's career that no one could have foreseen. Despite its mournful theme, the album is filled with so much light that it feels like nothing less than a catharsis. In a recent email interview, Pellitteri confirmed this impression with the depth of his own, saying the album "was not only a tribute to the memory of my daughter, but also an emotional outlet. I wanted to transform every stage of grief—of which acceptance is the fifth—into music." Pellitteri's weapon of choice against the darkness is celebration, which pervades most of his original tunes, and nowhere so evidently as in the opener, "Special K." Its sunny atmosphere encourages delightful trade-offs between guitarists David Gilmore and Yotam Silberstein, whose points and lines epitomize the verve of this band. At the helm is Pellitteri himself, who works the room with sublime energy and focus, as also in "The Bargaining." Here his rapport with bassist François Moutin completes the band's core competencies in a tune that, with the addition of Philip Hamilton's wordless vocals, harks back to the Pat Metheny Group's seminal road trips.

Whether rocking the title track with the always-engaging Gary Versace guesting on Hammond organ or balancing nostalgia and perseverance in the balladic "Last Autumn Sun," Pellitteri strikes masterful equilibriums in his melodies. Was this, I asked him, a conscious effect?

"Growing up I was fascinated by certain sounds typical of English rock bands of the 1960s and 70s, so I had those sounds in mind when I put this album together. The inspiration for my composing comes from life experiences. Music has to be a true expression of feelings. Composing might be influenced by the instrumentation you write for, but I think the music has to ultimately stand on its own regardless of the orchestration used to perform it."

If we can infer anything from such humility, it is that Pellitteri's raw materials are just that: sine qua non elements brought together out of emotional necessity. Likeminded depth of precision anchors "Rock House," in which peak intensities again find worthy representation in the two guitarists, yet with a restraint that maintains the underlying narrative integrity. It signals a shift in the bandleader's methodology, which came to fruition in a production style that was unprecedented in the scope of personal experience:

Said track, "Silent Song," ends the album on a ghostly note, yet also with a reminder that memory is the strongest link to immortality. Indeed, through this album Veronica's voice, now and forever, may live on in spirit where the body can no longer set its tender foot. Before this song we are treated a luscious take on Rihanna's stay, to which is prefixed an improvised prelude by bassist Moutin. This format is echoed in Pellitteri's follow-up album, Aquarius Woman, which features a bass preamble to Alicia Keys's "If I Ain't Got You," and here ignites another fine vehicle for the guitarists and Pellitteri's responsive sticks.

With so much intimacy woven into a single album, it's easy to feel like we've known Veronica all our lives, and it's precisely the comfort of her positive outlook on life that lends this project its genuine uplift. With that in mind, I wonder what Acceptance represents for Pellitteri as a musician, composer, and person:

"This album is a milestone in my life. As a musician and composer, I am proud of it. Its positive reception encourages and inspires me. It has made me a better, stronger person because it has kept me focused through difficult moments. It truly represents my acceptance of all aspects of life and it is an invitation into a brighter look to the future. I think Veronica would agree."

All profits from Veronica Pellitteri Memorial Fund, a young musicians' scholarship program administered by the Fiorello LaGuardia Performing Arts High School in NYC, from which Veronica graduated in 2009, making it something to be proud of not only for those producing it but also those buying it.