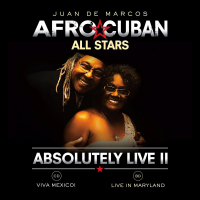 You can find many groups who call themselves "Afro-Cuban All Stars." But few have the pedigree of this ensemble led by vocalist Juan De Marcos Gonzalez, co-architect of the legendary Cuban roots Buena Vista Social Club sessions (1997, Nonesuch/Elektra) and dubbed by Downbeat as "the Quincy Jones of Cuban music." Marcos' first new music in six years comprises highlights from the All-Stars' engagement at an international music festival in Guanajuato (Mexico); this CD provides the audio companion to the DVD of that performance.

In a multicolored, multicultural celebration, Absolutely Live II
surveys five genres of Cuban music and their connections to New Orleans and other jazz sources. The opening "Yaimara's Groove" immediately pulls you into their party: This thick and pungent musical gumbo uses a cool Latin groove as stock, tosses in visionary vibraphone, piano and trumpet solos, then simmers to Afro-Cuban perfection. It's as if "Yaimara's Groove" is the name of the coolest Cuban eatery on Bourbon Street and the buffet is open all night long.

de Marcos' original "Camino de Santiago" also reaches into the Creole district of New Orleans with a resounding piano riff that burns through all sides like an ember, dark and hot, the sound of pianist Horace Silver sitting in with a Cuban orchestra. As the lead solo and ensemble reply vocals grow more fevered, the instrumental ensemble pours on accelerant and then a burning trumpet solo strikes the match.

Ensemble horns do more than simply open the son "Tumba y Bongo," they blast it out of a cannon. Trumpet and piano soloists bob and weave as if they were parading the ensemble in and out of a summer shower of soft, ringing vibes. Like most of these tunes, "Tumba" builds in vocal and instrumental intensity the longer it continues, with bongos, congas and timbales popping in and out of the breaks to keep its powerful groove unbroken, and trumpet blowing like Dizzy Gillespie, high and hot.

The epic, twelve-minute jam "La Mujer del Barbaro" closes like the colorful climactic dance in a movie musical. It brings the curtain down on Absolutely Live II in a kaleidoscopic swirl of piano and vocals and percussion and horns, all bouncing off each other and lighting up your ears like a shower of Afro-Cuban jazz (all-) stars.

About Afro-Cuban All Stars