Emanuele Primavera Quintet: Above the Below

By FRANCESCO MARTINELLI
September 15, 2020
Sign in to view read count 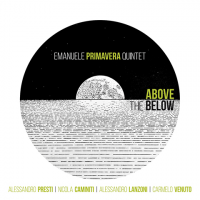 From the very first notes of "Walk Away," the opening track of this album, one perceives a special feeling of poise, weight, balance and intense storytelling, a marker of great music. These young musicians have something to say, and they know how to speak their piece.

As a composer Emanuele Primavera combines melodic invention with harmonic openness, leaving an open field for the inspired contributions of the other members of the quintet, all from Sicily apart from Florentine pianist Alessandro Lanzoni, an up-and-coming personality in the strong tradition of Italian jazz pianists. A hotbed of Italian and Mediterranean music and culture, Sicily is under-represented internationally in jazz but musicians like Nicola Caminiti are changing that. He stuck out playing "My Favorite Things" on soprano during a jam at the Messina Sea Jazz Festival and his development has been steady ever since; he has a lot of talent but also put in plenty of hard work and studies in NYC to bring it forth. Trumpeter Alessandro Presti is much in demand these days, and the lyrical, dry and dark quality of his lines explains why. Alessandro Lanzoni also emerged when he was just a kid, but letting him mature outside of the terrible "enfant prodige" system has been a wise choice. He is often in charge to establish the opening mood and his appropriate, inventive and sometimes humorous answers to the soloists' inventions are a joy.

Track after track, the music develops smoothly, alternating open improvisations with loose-limbed arrangements, small breakout episodes with exchanges, stretching the structure but maintaining a sense of direction and a momentum. All the musicians are remarkably attuned to the project, so there is a unity of purpose, a cohesion to the music which often transcends individual voices. The slower pace of the mournful "Sea Lament," with its unisons and harmonizations between horns and piano, creates a striking contrast with the following "Impro Entropya" which shows the more adventurous side of the band; Carmelo Venuto on double bass shines on both tracks, in the first with a supporting and connecting role, in the second as a solo voice beside the winds, combining both in a fully formed solo on "Finding Clarity in Discomfort."

As always Primavera sits behind the drums pushing, commenting, conducting and seeming to thoroughly enjoy the results. In his titles he also uses words as deftly as his drumsticks. "Finding Clarity in Discomfort" is a reminder of the often-cited need to leave the "comfort zone." "Sea Lament" and "Diary of Waiting" resonate about 2020's atmosphere. "Black Dagoes"—well, Louis Prima, hailing from Salaparuta (Palermo), like fellow New Orleans trumpeter Nick LaRocca, was once kept out of a recording session in NYC because the occasion was not integrated, only white musicians. In days of race and migration issues it is worth remembering that Italians were not always considered "white," whatever that may mean. But one could follow the stories told in this album even without the hints from the titles: strongly recommended.

Title: Above the Below | Year Released: 2020 | Record Label: Abeat Records