Billy Bang Quintet featuring Frank Lowe: Above & Beyond: An Evening in Grand Rapids 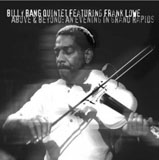 Few musicians in any category combine violinist Billy Bang's intrinsic understanding of his instrument's tradition with the adventurousness associated with the New York City loft scene of the 1970s and wrap it up in an inside-out style honed and refined over the course of a thirty-plus year career.

For the last few years Bang has been enjoying a creative peak, particularly as a member of the William Parker Violin Trio, which released Scrapbook (Thirsty Ear, 2003), and as the leader of his own projects that draw on his experiences as a Vietnam veteran. Longtime friend and collaborator, tenor saxophonist Frank Lowe, was in the band that made Vietnam: The Aftermath (Justin Time, 2001, but didn't live to see the recording of the follow-up, Vietnam: Reflections (Justin Time, 2005).

Above & Beyond captures Bang's rhythm section (Andrew Bemkey on piano, Todd Nicholson on bass and Tatsuya Nakatani on drums) with Lowe live at the Urban Institute for Contemporary Arts in Grand Rapids, Mich. in April of 2003. By September of that year Lowe would be dead from lung cancer, but at this show the pair's playing on the hour's four long selections is telepathic. Lowe's wind may have been diminished, but his style had evolved away from the fire-breathing of his youth to prettier, pithier mutterings that perfectly complement Bang's staccato solos and rhythmically expansive melodies. Lowe doesn't entirely abandon his free jazz roots and his brief atonal runs help build the intensity that Bang's compositions are designed to release.

Nor does this music lend itself easily to shuffle play: this concert is best experienced as a whole, letting each musician work his way into his improvisation, then marveling at the way his band mates bring the tunes back into focus. In Grand Rapids, the Billy Bang Quintet was at the height of their powers. Frank Lowe is sorely missed.

Silent Observation; Nothing but Love; Dark Silhouette; At Play in the Fields of the Lord.