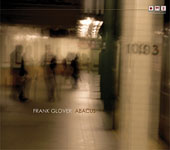 Every once in a while a musician comes along that lives and breathes the music. It comes out of his brain, his fingers, his mind and heart. Having debuted with Politico (Owl Studios, 2009)—a reissue of his 2004 self-produced release—clarinetist Frank Glover might just be one of those musicians. Full of soundscapes that reflect the inner as well as the outer life, Abacus takes his music one step farther in textured, deeply colored ways.

Glover, relatively unknown nationally, is highly respected in Indianapolis and for good reason. Classically trained at Indiana University's excellent music program, then inspired by John Coltrane, he quit after two years to pursue what drives him—the sounds he hears in his head. While preferring the saxophone, Glover's mastery is equally reflected in on the clarinet. The best musicians always have their own unique story to tell, and Glover has a range that is both mythic and immediate.

Recorded with an orchestra, the story opens with "Two Shades of Green." Quiet and unassuming, it shows off Glover's power of nuance, invoking a rising sense of revelation, the day beginning with a white-gold sunrise slowly coming up over rain-drenched city streets. The sound is orchestral, but Glover's quartet, Kihlo—featuring bassist Jack Helsley, keyboardist Zach Lapidus and percussionist Dave Scalia—adds to the conversation with evocative, whispered solos that are pure improvised jazz.

Fascinated with the bell-like sounds of marimba, an exotic touch on the title song, Glover draws his paintbrush through many lines of striated logic and emotion, each with a different instrumental color. The music is actually constructed in three movements, a concerto for orchestra, but more chameleon-like in form. This is no accident; Glover likens his work to pure music, not wedded to any particular style, an idea which lends continually surprising variety. The song titles are actually a bit misleading; the flow of the work is more cohesive when met on the level of a single, interconnected story.

The second movement, "Ballerina," is an elegant dance that approaches the ideal singular voice with the work of pianist Lapidus, who adds a carefully defined yet intuitive perspective. A French horn then takes the stage, providing thoughtful counterpoint from the orchestra. It then develops into "Lighthouse," a soliloquy on loneliness, revealing a quiet epiphany from Helsley on acoustic bass, countered by Glover and then augmented by the lyrical Scalia. "Salamanca" takes another turn into the alien and mysterious with a Spanish jazz tango. The CD's meeting points are the hard-driving final theses "Modern Times" and "Robot," both possessing the characteristics that Glover expresses so well; never treading a circular path, the ill-fittedness of modern life is eroded away by the pure prismatics of his inner vision.

Glover can sing as well of the ghost in the machine as of the machine itself, revealing the hidden colors of each. An American voice, a human voice, a thinking and feeling soul—all of these things are reflected in the intense, revealing Abacus.