BY CHRIS MOSEY
September 3, 2019
Sign in to view read count 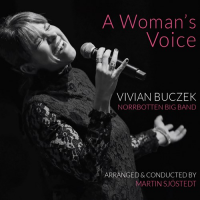 An ambitious project from Sweden: vocalist Vivian Buczek joining forces with the Norrbotten Big Band using song to illustrate life from a woman's perspective. Buczek says: "It's about taking the step from a girl to a woman, looking back in time and then to the future, finding my place in the world and daring to go my own way."

With this album she celebrates some of her main sources of inspiration, artists who have made a lasting impression over the years: Ella Fitzgerald, Nina Simone, Abbey Lincoln, Carmen McRae, Wayne Shorter, Sarah Vaughan, Shirley Horn and Sweden's own Monica Zetterlund.

She starts with Abbey Lincoln's "Throw it Away," a defiant "no regrets" anthem with a solid, catchy melody, about a woman rummaging through her belongings and trying to make sense of her life. It was by penning such songs that Lincoln celebrated her release from the marital clutches of Max Roach.

"Infant Eyes" switches the mood, joyfully celebrating maternity, with lyrics by Jean Carm added to a tune by Wayne Shorter, which amply demonstrates the saxophonist's gift for melody. Buczek draws on her considerable scatting abilities to get the song going, and the big band kicks it into touch with a powerful but sympathetic accompaniment.

Next up, "Lighthouse" examines the course of true love from an adult perspective. The imagery is a trifle forced, at times downright pedantic, but its heart is in the right place.

"I Morron (Tomorrow)" is about longing for a new start with a new day. It contradicts the nostalgia of Jerome Kern's "Yesterdays" which crops up two numbers further on. "Tales," about an innocent abroad, is musically reminiscent of that awful old chestnut "Nature Boy" and contains some strained imagery concerning "the trenches of your mind."

With "Here's to Life" Buczek pays tribute to the late, great Shirley Horn who made the song her own. The closing number, Randy Newman's lachrymose little masterpiece "I Think It's Gonna Rain Today" is unsuited to its big band arrangement. With this Buczek—alas!—goes out with a rather sad and messy whimper, which is a shame because much of what went before was very good indeed.