Atlantico: A Stovepipe Hat Made From Silk

BY MARK SULLIVAN
August 9, 2021
Sign in to view read count 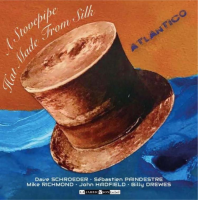 As on the previous albums the defining sound comes from the leaders: their compositions, as well as Schroeder's colorful array of horns (which must surely represent one of the greatest varieties for any player on a single album, here and on the previous two). Schroeder's "Taking Notice" opens the set with a gentle swing feel, and the distinctive front line of his alto clarinet and Drewes' tenor. Both horns take melodic solos, along with piano and bass. "Darkmiere" and "None So Blind" both pare back to the basic quartet. But "basic" in this case means piccolo on the first, and bass flute plus sopranino sax on the second.

"Rachid" comes from the pen of the late French pianist Michel Petrucciani—a rare case of the group including a cover— and features the combination of chromatic harmonica and tenor. Harmonica is an unusual doubling instrument for a wind player, but Schroeder makes it sound completely natural. His "True North" is a funky exercise which includes the only use of Rhodes piano on the album, along with soprano and tenor saxophones. Schroeder's ballad title tune spotlights the Mongolian ever buree (a clarinet family instrument with the timbre of a basset horn). The title refers to Abraham Lincoln's iconic hat, a reminder of "bygone days when malice towards none, with charity for all were ideals to live by."

The album closes with two quartet tracks. Paindestre's "Au Sujet de Mr. Satie" ("About Mr Satie") is a lyrical excursion evoking French composer Erik Satie, featuring his piano and sopranino saxophone. Closer "On The Sonny Side of Rollins" is Schroeder's calypso salute to the great Sonny Rollins (reminiscent of "St. Thomas"). An upbeat conclusion to a fine, varied set of modern jazz. A satisfying ending, but further adventures would be welcome.

Taking Notice; Darkmiere; None So Blind; Rachid; Blue Saint-Jacques; True North; A Stovepipe Hat Made From Silk; La Paindestre; Au Sujet de Mr. Satie; On The Sonny Side of Rollins.