Home » Jazz Articles » A Song For Everyone: The Story of Creedence Clearwater Revival 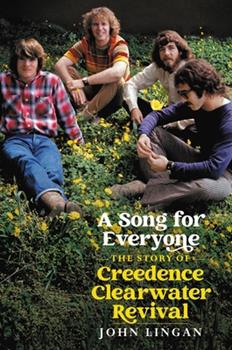 At least according to the back-cover blurbs, John Lingan conceived and executed his chronicle of Creedence Clearwater Revival as more than just the biography of a band. It is intended as a chronicle of the times in which the band existed. To the author's great credit, he is largely successful in his execution, due in no small part to the topical nature of so many songs by the mega-successful group. Yet in approaching A Song For Everyone upon its publication, the author's underlying themes in his narrative turn even more relevant, to the extent that CCR's history becomes an allegory for American, nay global, society circa 2022.

This writer creates his narrative with much the same terse economy as the arrangement of a Creedence song. Lingan's prose is unadorned and right to the point, imbuing each theme with just the deserving proportion of significance in the arc of his story line. So, the burgeoning friendship of Doug Clifford and Stu Cook leads logically to the entrance of John Fogerty into the increasingly larger picture. Likewise, those intervals in which the writer depicts the social movements of the time, whether in the realm of civil rights or anti-war sentiment, correlate to each successive stage in the evolution of CCR, including the cracks in the band unity that emerge simultaneous with their burgeoning popularity.

There are moments the author becomes self-conscious in his interweaving of those themes, especially after his accurate delineation of the seismic impact of The Beatles. Yet John Lingan's shortfall(s) in that regard are no more egregious than those of guitarist/vocalist John Fogerty, the chief songwriter of this extraordinarily popular band of the late Sixties and early Seventies; it's fair to say the tension that arises from Lingan's recounts of student protests is no greater than the suspense that flows from each leap of faith enacted by Cook, Clifford and the Fogerty brothers (elder sibling Tom actually joins the lineup first).

Under the aegis of Fantasy Records' gimmickry-ridden marketing, the foursome actually bottom out as the ill-named (and outlandishly costumed) Golliwogs. Not that the quartet needed the impetus, but it's probably no coincidence this major reinvention occured at this very point their musicianly skills were about to ripen sufficiently to belie such a cosmetic approach. In retrospect, doffing the extraneous outfits was not only precursor to the down-to-earth image Creedence Clearwater Revival purveyed at the height of their success, but also in stark contrast to the made-for-TV contrivance that was the Monkees just a couple years before the California foursome found its collective voice ( the author's initially confounding references to the manufactured foursome eventually reveal the pertinence of Monkees' co-creator/producer/director Bob Rafelson's film work (Easy Rider (Raybert Prod., 1969) and Five Easy Pieces (BBS Prod., 1970)).

It's at that very point, roughly a third of the way through that the dramatic undercurrent in John Lingan's story-line bubbles up to the surface with understated but nonetheless unmistakable intensity. As such, the most striking passages render superfluous the photo section within The Story of Creedence Clearwater Revival. In another instance of irony, this flash- point occurs coincidental with Saul Zaentz' purchase of Fantasy Records and the establishment of the American government's real or imagined war on the counter-cultural forces with whom Creedence aligns itself in its home state. The transition of adopting their new name becomes an almost surreal corollary to the tribalism of post-Trump United States: the war on drugs, a ratcheting up of drafting for the military necessitated by the escalation of war in Vietnam and the emergence of a class-rooted, racially-tinged societal hierarchy becomes just as overt as CCR's own collective blue-collar persona.

In keeping with his experience writing for the Washington Post and the New York Times, John Lingan maintains his objectivity right to the end of A Song For Everyone, for the most part anyway. He does become somewhat overly effusive in regaling readers of CCR's live performances, but that's certainly forgivable as he otherwise avoids proselytizing for any of the various viewpoints that emerge from the fracture(s) in America as the group ascends to remarkable levels of commercial success. His shift to first person voice near the very end is somewhat disconcerting, yet he still restrains himself from delving into the bilious soap- operatics that arose from the split of Creedence and Fogerty's ensuing solo activities during which he refused to play the band's songs in his solo performances for some time.

To his even greater credit, the writer betrays no favoritism as toxic fission strikes the quartet with the increasing overweening and arbitrary dominance of John. For instance, due to what he heard as serious audio issues, he would not allow any footage of the Creedence performance to be included in the film of the 1969 Woodstock festival . The album Mardi Gras (Fantasy, 1972) represents the latter's knee-jerk reaction in the opposite direction, a response of faux magnanimity upon which Lingan avoids passing judgment any more than the missteps the guitarist/vocalist/songwriter commits when attempting to renegotiate the Creedence Clearwater Revival contract with Fantasy; the long-term ramifications of that arrangement rise to the surface just as the band begins to reap the rewards of its decade-long devotion to music, but it's nonetheless admirable the author lets the facts speak for themselves in this regard.

And, in what may be the defining corollary between this book and the band to which it's devoted, the story covered in these three-hundred some pages draw to a close ever so slowly and inexorably, in almost muffled fashion. As John Lingan describes the Creedence Clearwater Revival dissolution, 'the band didn't explode, it dissolved.' And it happened, not so surprisingly, in the wake of the group encountering more than a little disfavor from the hipper-than-thou cognoscenti as well as its intrinsically fickle fanbase— based on the very consistency that garnered the group critical praise plus its continuous commercial success the prior two years.

Vituperative feedback to the aforementioned seventh studio album was simply the capper on an ignominious fall from grace. It's that very precipitous descent which may account for the paucity of socio-political references in the final five chapters of A Song For Everyone; John Lingan's historical research in general is, in other respects, as acute as his investigation of Creedence's development. But it's an odd omission, perhaps even an egregious one, to overlook the breaking of the Watergate scandal that ultimately ousted Nixon from office, especially as it occurred almost simultaneously with CCR's split.

Then again, the oversight doesn't significantly undermine the scholarly recitation preceding it; in a way it's a reflection of how various initiatives, including the nascent stages of feminism, were waning in intensity somewhat under the pressure from the 'establishment.'

In the end, the arm's-length distance John Lingan maintains throughout virtually the whole of A Song For Everyone may be the book's greatest asset. It's not so much that the writer's passion is missing as much as it's well-managed; as in his detailed inspection of John Fogerty's songwriting process—one borne less from flashes of inspiration than assiduous craftsmanship— the author's eye for detail never betrays him, to the extent that the photo insert included might well have been redundant if it were not for the priceless shots of band members from early school years, images from social movements of the times and other ancillary graphics related to the various themes of the book.

His measured approach, academic to a fault as it might seem, also correlates to the fundamental composition of this book, one that precludes a strained reach for significance or any need to contrive melodrama. Those elements naturally permeate this archetypal tale of a rock and roll band's alternately heroic and tragic presence in the culture of the late Sixties and early Seventies, but it nonetheless required yeoman's work on the part of the biographer to capture it with so much vivid, modern-day relevance.