Yuma Jazz Company: A Night Such As This 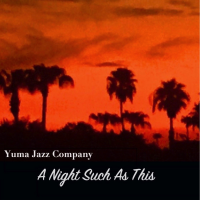 Spurning a global pandemic and daytime temperatures hot enough to fry an egg, the dauntless Yuma Jazz Company remains steadfastly open for business. That's Yuma as in Yuma, Arizona, a city of roughly 100,00 hardy souls tucked into the southwestern corner of the state, midway between Phoenix and San Diego, touted online as "the Gateway to the Great Southwest." Also home for almost twenty years to the Yuma Jazz Company whose sixth recording, A Night Such as This, has the group pared from quintet to quartet; essentially, trumpeter/composer Steven Hennig and rhythm.

The session comprises half a dozen songs, all written by Hennig. They are rhythmically strong if not melodically memorable. As the lone horn on site, Hennig is obliged to carry the melodies, a task he performs reliably well. Tempos are generally slow to moderate, underscored by funky rhythms and an amorphous but no less perceptible "southwestern" ambience. Hennig is an able soloist with admirable range who shares the honors on most numbers with the talented guitarist Jason Arviso. Percussionist Brandon Coz appends brisk solos on "San Luis" and "Still Got Nothing," the most animated number on the album.

Hennig's shuffling "San Luis Connection" sets the compass, as the group settles in for a smooth and worry-free ride that leads to more of the same on "A Night Such as This," "Grab You Somethin,'" "A Carlson Frame of Mind" and "When We're Done," interrupted only by the more high-spirited "Still Got Nothing." While the Yuma Jazz Company is certainly no behemoth on the order of Amazon, General Motors or Apple, it's good to know that smaller companies such as Yuma Jazz keep defying the odds to make sure that high-quality music survives in their little corner of the world. Long live Yuma Jazz Company.

Title: A Night Such As This | Year Released: 2020 | Record Label: Hennig Music