By FRIEDRICH KUNZMANN
January 4, 2021
Sign in to view read count
The three albums below come from international European groups (among them one with a substantial Asian infusion) who recognize no boundaries in music nor borders between nations. Taking a variety of musical idioms and traditions and turning them into something new, each musician here is inspired by the lack of musical limitations that allows them to delve into the depths of their passion with the most diverse casts of sidemen and co-leaders, amounting to an exciting account of a contemporary European sound. 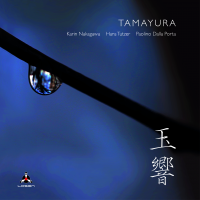 Best-known for playing alongside Anders Jormin in the bassist's 2015 trio outing Trees Of Light (ECM Records), Munich-based Koto player Karin Nakagawa's project finally sees the release of its debut album, co-lead in democratic fashion between Italian saxophonist Hans Lutzer, bassist Paolino Dalla Porta and herself. Born in Yokohama, Japan, there's no denying Nakagawa's native influence throughout the album. Her 25-string Koto is in steady and balanced interplay with her partners, who colorfully adapt to the dimly plucked patterns of the Japanese zither. At times pulse-giving and rhythm-dictating, at others swaying and atmospheric, Dalla Porta adds the low frequency spectrum with humility and oversight—adequately completing the carefully constructed sonic image between slow soprano saxophone leads and harmonic frames provided on koto. From gentle arpeggios through determined pedal-point to single note phrases, the koto's adaptability widens the trio's aesthetic and technical reach substantially—enhancing its already diverse array of sound. Highly original chamber jazz. 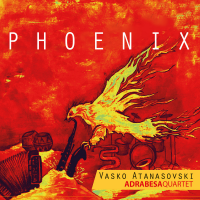 Seamlessly fusing Balkan folklore with a variety of musical traditions in a progressive and at times dramatic context, Slovenian saxophonist and composer Vasko Atanasovski's Adrabesa Quartet can be sure to grab the attention of world music aficionados with this exciting debut for Moonjune Records. An active unit for over a decade with alternating members, the Adrabesa Quartet creates special moments of tight interplay in which each instrument is given the opportunity to shine while celebrating an air of festivity and conviviality. Atanasovski's longtime collaborator, Italian accordionist Simone Zanchini, is an especially prominent and virtuoso presence throughout the set. He engages in wild crescendi and harmonically challenging improvisations, while Frenchmen Michel Godard holds down the lower ranges via tuba and the historical bass wind instrument "serpent"—giving the Polka sections their necessary "oomph." An impressive international summit of European craftsmanship, Phoenix not only represents an intriguing entry to the canon of modern folklore, but moreover embodies an invigorating addition to the Moonjune catalogue, contrasting the label's otherwise '80s fusion-tinged aesthetic with an earthy and natural tone. 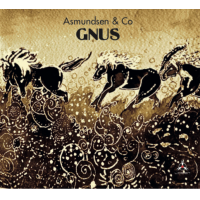 Vidar Johansen has been a quiet though important fixture in the Norwegian jazz scene for about four decades, not necessarily as a leader, but contributing to the imagined Norwegian songbook with many distinctive compositions. On this sophomore effort as Asmundsen & Co, bassist Tine Asmundsen wanted to capture her colleague's compositional genius with a set of exclusively Johansen originals. While the sonic properties of the recording unfortunately reveal a tinny quality, the interplay and compositional content leave little to be desired. Some titles date back to Johansen's time with drummer Espen Rud's group "Krabel" in the '80s, as the opener "Gnus." With this swinging tune of comfortable post-bop constitution, the band proves an effective ensemble at reviving Johansen's music with a fresh spin to it. "In a Dream" dates back to Johansen's time with Anner Marie Gjørtz's quintet and also appears on Johansen's 1997 album Lopsided (Curling Legs). In contrast to his post- bop-infused writing, the song belongs among the lyrical and folkloric essays in his oeuvre, otherwise referred to as a more "Norwegian brand" of jazz. It is within this rather melodically direct and melancholic setting, that Johansen's unique character truly comes to the fore and draws attention. Having worked with the likes of fellow Norwegian heavy weights Jon Balke, Thomas Strønen and Jacob Young, among many others, this program focused around Johansen's music seems justified, maybe even necessary.

Tracks: Gnus; Her; Busken Smoul; Song for an Absent Piano Player; Liten Frostmåler; Osckars Drøm; In a Dream; My Boy.