The Peter Edwards Trio: A Matter Of Instinct 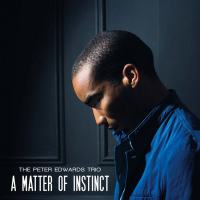 This is the second album by Trinity Laban graduate and 2014 MOBO Awards nominee Peter Edwards, his first being 2014's Safe And Sound. Edwards was a member of a group led by the late trumpeter Abram Wilson and is currently a member of vocalist Zara McFarlane's band. Opening with an infectious Latin beat, "Samba City" recalls the foot- tapping imperative of Chick Corea's Return To Forever era. A calmer mood ensues with "Loved Ones" recalling the blues-infused, chordal-rich piano of Joe Zawinul during his time with the Cannonball Adderley Quintet.

The more rhythmically complex "Groove Swing Funk" certainly matches its title and with a memorable theme it conjures-up an evocation of the Dudley Moore Trio in full flight. This album offers a veritable potpourri of styles, such as the lively, swinging "The Runaround" adorned by semi-pastiche Erroll Garner-like swathes of piano.

The title track sees Edwards on slinky Fender Rhodes backed by a keen sheening rhythm from Moses Boyd, the drummer half of the MOBO 2015 award-winning duo Binker and Moses. The straight-ahead "Flying High" with Edwards returning to acoustic piano precedes the slow blues of "Down But Not Out"; reminiscent of Ramsey Lewis it's embellished by an excellent pizzicato bass solo from Max Luthert.

The final number "Escape Velocity" has the trio in expansive mood, the piece distinguished by a repeated hook-like motif which eventually all-but closes-out the piece. Edwards' lithe compositions are matched by the trio's consummate performances, all contributing to a truly compulsive listening experience.

Samba City; Loved Ones; Groove Swing Funk; The Runaround; A Matter of Instinct; Flying High; Down But Not Out; Escape Velocity.