A Look Back At Robert Glasper's Enoch's "Inaugural" Meditation 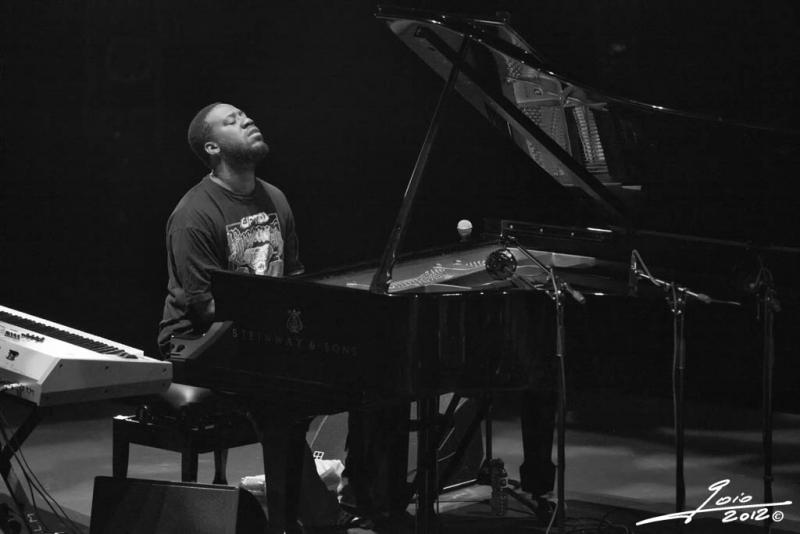 By K. SHACKELFORD
October 2, 2014
Sign in to view read count
One of the most powerful jazz documentation of a Presidential Inauguration was a YouTube presentation of Robert Glasper's "Enoch's Meditation," a piece from his 2005 album entitled Canvas. Glasper, a Blue Note artist and Grammy Award winning jazz piano star, has received critical acclaim for his trio style that weaves together a tapestry of diverse musical genres from rock, hip hop, gospel to even country, staying within the jazz aesthetic in a way that is mind-blowing.

Through the ingenuity of Josh Jackson, special presentation director at WBGO 88.3 FM, "Enoch's Meditation" received a presidential "rendering" where the piece was unshelved to interpret themes of jazz, race, and democracy with added speeches by Martin Luther King Jr., Barack Obama, and an audio snippet of author and Princeton professor Cornel West. The original title of the piece was changed to "Enoch's (Inaugural) Meditation" to honor Obama's election to the Presidency.

The piece has become a highly viewed jazz piano performance on YouTube's website, attracting over 240,000 views, receiving more attention than its original version on YouTube.

In his book Freedom Is Freedom Ain't: Jazz and the Making of the Sixties, eminent jazz scholar Scott Saul points out the historical relationship between jazz and black church music, a discourse oftentimes unexplored. A significant number of black jazz musicians developed their instrumental 'chops' within Pentecostal and Holiness church traditions and carried the intense emotionalism, gospel phrasing, and spirituality of black church music into their jazz compositions.

Scott also notes that jazz musicians like Donald Byrd not only carried the 'soulful' and 'bluesy' aesthetic of black church music into their work, but also penned compositions with Christian-themed titles. Two of Byrd's song titles are "Amen" and "Pentecostal Feeling." Likewise, jazz pianist Mary Lou Williams entitled her compositions "Lazarus" and "Praise the Lord" in light of her own personal Christian experiences.

Since the conception of jazz music, many African American jazz musicians have used their titles and music as commentary toward political events of their day. Thus, jazz musicians assumed not only the role of theologian, but also historian and prophet.

In "Enoch's (Inaugural) Meditation" Glasper keeps this tradition with its 'Spirit' feeling style and his addition of religious and political audio clips from Martin Luther King Jr.'s "We Shall Overcome" speech and President Obama's 2008 victory speech at Grant Park in Chicago. The ad-hoc performance features bassist Alan Hampton and Jamire Williams on drums.

Now, I'm not sure if Glasper knows a person named Enoch or is actually speaking about the biblical character. But if it's the latter, for Glasper to create a jazz composition about Enoch is impressive. Yet, connecting Enoch with the inauguration of President Barack Obama and the work of Martin Luther King Jr. is brilliant. Enoch is found in several books in the biblical text such as Genesis, Hebrews, and Jude. His reward from God was the privilege of being transferred, which means he was transported from earth to heaven without seeing death:

"And all the days of Enoch were three hundred sixty and five years: And Enoch walked with God: and he was not; for God took him." (Genesis 5:22-29) Then in the New Testament, the Apostle Paul Enoch's exemplary life: "By faith Enoch was transferred, that he should not see death, and was not found, because God had transferred him; for before his transference he had the witness that he had pleased God well." (Hebrews 11:5) The book of Jude also speaks of Enoch's prophetic authority: "And Enoch also, the seventh from Adam, prophesied of these, saying, Behold, the Lord cometh with ten thousands of his saints. To execute judgment upon all, and to convince all that are ungodly among them of all their ungodly deeds which they have ungodly committed, and of all their hard speeches which ungodly sinners have spoken against him." (Jude 1:14-15)

While there are few scriptures about Enoch in the biblical text, there are three apocryphal books devoted to Enoch in Judaism which are 1st Enoch, 2nd Enoch and 3rd Enoch. These books engage the life of Enoch after God 'took' him. Enoch is promoted to a heavenly leader because of his righteous judgment and leadership exhibited on a corrupted earth. Enoch's life is a symbol of righteousness and transcendence.

Martin Luther King Jr. and Barack Obama's rise to leadership served as a symbol to the country of a new reality about democracy, citizenship, and faith, in the midst of the historical problem of race. Although not perfect men, their rise to leadership showed that America was engaging in a new level of righteousness. In 2008, many wished to name Obama as the new Martin Luther King, Jr. or as a new African American religious humanist of sorts.

Yet we do not want to say that Obama is a reincarnation of King because it is a romanticized, naïve and false way of comparing these two men. Their political strategies and positions are notably different in certain areas; some would say if King were alive his theological beliefs would also be radically different from Obama. However, it is true that King's dream is embedded in America's collective consciousness, and for many, it has shaped how President Obama was viewed in 2008.

Obama's election for some Americans evoked feelings of uncertain dissonance in 2008 and in 2012. For many, the feelings of uncertainty was rooted in concern for his welfare in a country whose most notable African American leader, Martin Luther King Jr., was devastatingly assassinated for seeking a more integrated society.

On the other hand, as with any new President, others were concerned about his policies and leadership, which stemmed from different political viewpoints.

Glasper's trio captures this idea through thoughtful improvisation at the end of the piece. By inverting the presidential anthem of the United States "Hail to the Chief" into a slower tempo with melancholic chords under soft drum timbres, Glasper is saying something to us.

Glasper's performance of "Enoch's (Inaugural) Meditation" shows that with its moments of unpleasant chords and tense instrumentation, a jazz composition can sonically reflect and interpret events in society. Moreover, a jazz composition demonstrates how tension and chaos can oftentimes end in harmonic resolution and beauty. At the end of 2016, we hope the tension that is currently being experienced in the land will result in greater economic, political, and social resolution and beauty.

The Touch of Your Lips, Part 2: Touch and Tone Color in Jazz Piano