Soweto Kinch: A Life In The Day Of B19: Tales Of The Towerblock 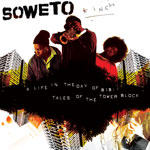 British saxophonist Soweto Kinch polarised opinion to the max in 2003, with his jazz 'n' hip-hop debut, Conversations With The Unseen (Dune). Many older listeners hated it, regarding it as a betrayal of tradition of Judas-like proportions. Younger, more inclusive listeners loved it, welcoming it as, simultaneously, a reconnection with jazz's long-lost roots in urban street culture and a way forward into a brighter and more vigorous future.

The battle lines weren't wholly characterised by age and anticipated prejudice, however. The great, conscious rapper KRS-One loved Kinch's music and gave him a support slot on tour. More surprisingly, perhaps, Wynton Marsalis professed to like it too. The New York Times, admittedly not the newspaper of choice for most rap fans, thought Kinch could teach the US a thing or two about narrative rap. And the album picked up a string of awards, the most prestigious of which was Album Of The Year in the Mercury Music Prize.

A Life In The Day Of B19: Tales Of The Towerblock, is likely to fan the flames of dispute even harder. As Kinch has it, Conversations was concerned with taking hip-hop to the jazz audience, while B19 is about taking jazz to the hip-hop audience. There is, consequently, an even closer focus on rap, narrative and jazzoetry, alongside more of Kinch's visceral, high octane take on post bop.

Americans say project and Britons say towerblock. B19, which has a precisely structured, linear narrative flow, observes the lives of three occupants of a rundown social-housing estate, as each endeavours to make something of his life in the face of poverty, educational disadvantage and political neglect. The central character is Kinch's S, a rapper/saxophonist trying to woodshed while the local welfare bureaucrats attempt to get him to take a job, any job, on minimum wage. There's a younger, bling-centric wannabe rapper and an older man trying to make a new start after a disastrous marriage. As the story progresses, the three characters start to connect.

The raps—especially from Kinch, Jonzi D and newcomer Perge Casey—are conscious and engrossing. And so is the playing. The album unfolds over 79 minutes with instrumental/jazz and rap/hip-hop tracks alternating and morphing in and out of each other. Kinch's core quartet—bassist Michael Olatuja, guitarist Femi Temowo, drummer Troy Miller, and the leader on saxophones and keyboards—bring together such diverse influences as Charlie Parker, Ornette Coleman, Stevie Wonder, Charles Mingus and Duke Ellington with energy and high style.

It's all, very nearly, a major masterpiece. And there's more to come. B19 ends with one of the characters finding something unexpected and dramatic in the basement (we're not told what). Next spring, Kinch will release part two of the story, Basement Fables, and we'll find out whether that something is a path to danger or a path to salvation—or neither, or both. Whatever it turns out to be, bring it on.

Opening Theme; The Mission; 10.30 Appointment; Adrian's Ballad; Love Gamble; Ridez; Padz; Marcus' Crisis; So!; Expansion; Out There; A Friendly Game Of Basketball; Everybody Raps; Who Knows?; The House That Love Built.

Soweto Kinch CD/LP/Track Review Chris May Dune United States A Life In The Day Of B19: Tales Of The Towerblock