McGill / Manring / Stevens: What We Do

BY JOHN KELMAN
September 14, 2006
Sign in to view read count 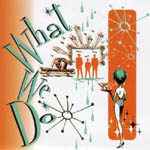 "Leonard Feather is now officially spinning in his grave. That, at least, is what journalist Bill Milkowski claims in his liner notes to What We Do by guitarist Scott McGill, bassist Michael Manring and drummer Vic Stevens. One thing is clear: faint hearts beware and jazz police stay away. Listening to this trio, which is typically associated with pedal-to-the-metal fusion, deconstruct and reshape a set of jazz standards with the help of David Torn's mixing acumen might actually be enough to give Stanley Crouch an aneurysm.

There are times when you just know they're messing with your mind. "Cherokee opens the disc gently enough: a newly-minted intro leads to McGill's gently-chorused tone delivering the familiar theme over Manring and Stevens' capable swing. But when it hits the solo section and McGill's heavily distorted guitar ratchets things up a notch, you know you're not in Kansas anymore. McGill shreds hard over Stevens' funky backbeat on Wayne Shorter's "Footprints, with a drum sound that's more rock than jazz.

It's not all about powerhouse excess. But it is about approaching the material with less reverence than most purists will be able to bear. "Blue in Green retains its gentle veneer but, like John Coltrane's "Naima, is treated as a rubato tone poem. Manring's processed fretless tone is the primary voice on both, while McGill creates a lush backdrop. Scott LaFaro's "Gloria's Step finds McGill on nylon-string guitar, demonstrating an advanced language that will come as a surprise to those who believe that fusion/progressive artists lack roots in the tradition. The tone may be dirty, but McGill's chordal intro to what morphs into an abstract look at Miles Davis' "Solar has clear antecedents.

Manring sets the tone for an imaginative take on Herbie Hancock's "Maiden Voyage. He shifts gears from a rubato opening into a funkified house-style take on Coltrane's "Impressions ; its complexion is as much the result of Torn's mix as the trio's approach. By the time it returns to Hancock's theme, both McGill and Manring's tones are so dense that they bring new meaning to the term "heavy metal bebop. "Icarus is as far from Ralph Towner's uplifting folk anthem as could be imagined, while Wayne Shorter's "Nefertiti gradually moves from acoustic atmospherics to electric saturation and back again.

A bonus disc from a 2001 live performance finds the trio on more familiar turf, helping establish context for the "standards disc. Just because artists choose to eschew conventional jazz doesn't mean they haven't studied it, or that it doesn't infuse what they do. What We Do, then, is an appropriate title for an album that twists its source material in so many unexpected ways that it's essential to approach it with big ears and an open mind. You may never look at standards the same way again.