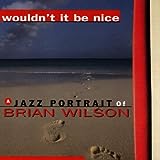 This is definitely no day at the beach.

Whether that's good or bad is highly subjective for A Jazz Portrait Of Brian Wilson, a 17-song tribute by contemporary artists such as Don Grusin, the Clark Burroughs Group and The Yellowjackets. Originally a 1997 Blue Note release, it was remastered and rereleased by IN2N Entertainment in 2004. Those not expecting instrumentals close in form to the Beach Boys leader will hear interesting ideas at work. But there's no question it will earn scorn from some loyalists - and at times it's understandable.

As a standalone project, it's an above-average modern jazz sampler and can be played as such - a roomful of listeners didn't make the Wilson connection until told. But producer and guitarist Tim Weston, who calls Wilson's music the "film score for his childhood and adolescence, says he's long wanted to capture its underappreciated compositional and lyrical elements. Weston chose a number of lesser-known pieces and focuses largely on the Pet Sounds era, "a time many people consider to Brian's most creative.

Artists are mostly matched well with songs and performances seem fueled by genuine artistry rather than contrivance. Vocalist Marilyn Scott intertwines well with pianist Russell Ferrante on a version of "In My Room that blends elements of straight-ahead, lounge and soundtrack. Vince Mendoza arranges a strong eight-minute orchestra arrangement of "Don't Talk (Put You Head On My Shoulder), with guitarist John Abercrombe leading the dark "motion picture interpretation. A welcome interlude throughout are five "cameo pieces by Burroughs' acapella group between 30 seconds and two minutes long, enough to be entertaining without the novelty wearing off.

Reworking a legend like Wilson is guaranteed to offend a certain number of loyalists, no matter how well performed. Those considering themselves likely candidates may want to audition vocalist Jeffrey Osborne's work on the title track, a generic pop-beat soul ballad arrangement which unfortunately makes it one of the album's most recognizable and least creative offerings. Among the other substandard contributions is Dori Caymmi's largely unintelligible bass vocals on a lounge-paced mildly Brazilian version of "Caroline No. Guitarist Steve Khan does OK within a standard Latin smooth jazz beat on "Don't Worry Baby, and having vocalist Gabriela Anders sing in Spanish is intriguing in theory, but it's a cumulative canvas of unremarkable background noise.

As for Weston, he and vocalist Shelby Flint lead a somber rendition of "The Warmth Of The Sun, saying the arrangement was influenced by learning it was written the night after President Kennedy's assassination. It's a bit sleepy - much like Wilson's version - and Weston's solo isn't remarkable in originality, but there's definitely an emotional quality of someone wanting to pay tribute. If Wilson's fans accept the album in such a mindset - a genuine, if not perfect, labor of love - then a similar sense of satisfaction and appreciation which Weston seeks is likely to achieve its purpose.