By Troy Dostert
November 15, 2020
Sign in to view read count 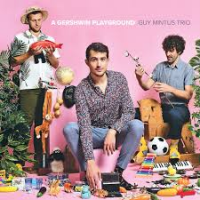 "Go big or go home" might as well be Guy Mintus' mantra. The Israeli pianist has a forceful presence on his instrument, and he seemingly brings every ounce of talent and creativity he possesses to every record he releases. His debut trio album, A Home In Between (Self-Produced, 2017), was a terrific amalgam of styles, showcasing Mintus' distinctive blend of bop, classical and global folk idioms. On A Gershwin Playground, he brings his fearsome technique and chameleon-like stylistic approach to an entire album of Gershwin standards—including a tour de force rendering of "Rhapsody in Blue"—and, if that weren't enough, also takes a few turns on vocals. The result is one of the more enjoyable and irrepressible releases of 2020.

For any listeners wondering if the world needs another Gershwin tribute album, in Mintus' hands, the answer is an unqualified yes. His deep respect for the master's genius is abundantly evident, yet Mintus does not hesitate to put his signature stamp on each of these tunes. "Let's Call the Whole Thing Off" struts right out of the gate, with an insouciant air punctuated by Mintus' rhythmic dexterity and punchy right-hand flourishes. It also swings mightily, helped by Mintus' adroit partners, bassist Omri Hadani and drummer Yonatan Rosen, who are as comfortable in the pocket as they are roaming between time signatures and idioms, as they are frequently called upon to do in Mintus' unpredictable arrangements. Whether it is injecting a bit of ragtime in the midst of Mintus' clever melding of "Fascinating Rhythm" and "I Got Rhythm" or using a free-spirited Middle Eastern rhythmic structure for "Summertime," Mintus and his colleagues execute these daring maneuvers seamlessly.

Although Mintus' vocal ability is not at the level of his pianistic virtuosity, it is hard not to smile at the brio he brings to "It Ain't Necessarily So" or the searching emotion wrung out of "I Loves You Porgy/Prayer for Healing," wherein Mintus' impassioned wordless singing transforms Bess' poignant struggle into a plaintive spiritual offering. The sheer exuberance and zeal Mintus brings to his music more than compensates for the occasional stumbles in his vocal delivery.

And then there is Mintus' brilliant interpretation of "Rhapsody in Blue," a fifteen-minute extravaganza highlighting the pianist's deep feeling and sensitivity, not to mention his power and boundless energy. Finding the perfect balance between heartfelt devotion to the original and Mintus' own charm and creativity, it is fully of a piece with the character of the album as a whole. The time was right for Mintus to tackle this kind of a project, and he pulls it off wonderfully.

Let’s Call the Whole Thing Off; Fascinating Rhythm/I Got Rhythm; The Man I Love; It Ain’t Necessarily So; I Loves You Porgy; They Can’t Take That Away From Me; Someone To Watch Over Me; Rhapsody in Blue; Summertime.