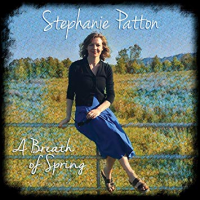 Michael Chabon's alternate history The Yiddish Policemen's Union (HarperCollins, 2007) is set in Sitka, Alaska, located on the southeast portion of Alaska, situated on the west side of Baranof Island and the south half of Chichagof Island in the Alexander Archipelago of the Pacific Ocean. But Sitka is not only notable for its literary allusions; it is also home to the vocalist-producer Stephanie Patton, whose family has been a part of the Sitka jazz scene for her whole life. Her father has had a long-standing radio program, Sunday Jazz, and Patton presently hosts her own jazz show, After Hours, heard each Monday Night at 10:00 PM, broadcast on KCAW Raven Radio,.

Patton is also a jazz vocalist, specializing in the Great Amercian Songbook and Bossa Nova, according to her Summit release A Breath of Spring. The disc is divided evenly between the two genre streams. Her core support is provided by the traditional piano jazz trio, augmented by additional instrumentation with crack arrangements by band members. Patton provides a well-delivered repertoire containing familiar tunes. "On Green Dolphin Street" is propelled by bassist Mark Saltman giving Patton's vocals a gentle momentum. Patton's voice recalls Chet Baker's vibratoless delivery, giving her performances an ethereal quality that is very appealing.

Patton and company turn "The Way You Look Tonight" on its head, giving it a jaunty, conversational personality. She dispatches "Corcovado" and "Fotografia" with quiet authority and touch. Patton and pianist Todd Hunter penned the closing "Close to Me," which tidily rounds out this even dozen songs. Patton is a conservative singer who pays special attention to the melody in a nice homage to the composers.

On Green Dolphin Street; My Romance; Corcovado; That’s Love; Fotografia; What’ll I Do; The Way You Look Tonight; The Very Thought of You;They Can’t Take That Away from Me; So Many Stars; The Nearness of You; Close to Me.