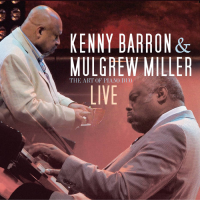 Genius in 20 fingers and 176 keys. That's what we have right here. The late Mulgrew Miller and the very present Kenny Barron each represent something of a gold standard in jazz piano, so it's no surprise that they meshed well whenever they met. This collection delivers three duo concerts from that pair—one captured in Marciac, France in 2005; the others recorded two days apart in different cities in Switzerland in 2011—and the results speak volumes about these two giants of the music.

Rather than engage in a cutting contest to treat this like sport, each man plays off the luxuriant contributions of the other. It's a show of mutual respect and a comfortable partnership, playing out beautifully across more than three hours of music. Barron and Miller both take their time exploring every nook of each song and every recess formed by their fertile minds. One moment in a single song might find cascading streams of notes undergirded with block chords; another may deal with sprinkled melody atop stride piano suggestions; a third could succeed by ratcheting up rhythmic and harmonic tension; and a fourth may present dizzying chromatic chutes and ladders juxtaposed against one another. All of these match-up techniques come and go at a moment's notice and there's clear logic in each and every transition, sudden or seamless in nature.

Those listeners searching for a little spirit and vibrancy will find plenty—runs and spirals on a zesty "Recorda Me," bluesy bravado during "Blue Monk," bona fide bop on "Yardbird Suite" and "Joy Spring"—but Barron and Miller also enjoy dropping into nostalgic corners here and there. And while the art of the duo is the explicitly-stated topic at hand, each man also goes it alone once at each concert. These solo pieces typically turn out to be the prettiest on the programs. Left alone to ponder, each player conjures winsome wonders. Barron's "Spring Can Really Hang You Up The Most," for example, is the most awe-inspiring of balladic charmers, and Miller's "I Got It Bad And That Ain't Good" finds him testifying to the song's truths in late- night mode.

A remembrance of three incredible nights from two beautiful musicians, this three-disc set serves as a reminder that they don't make them like this anymore. Miller is sorely missed and Barron remains a national treasure.