By Jack Bowers
September 14, 2013
Sign in to view read count 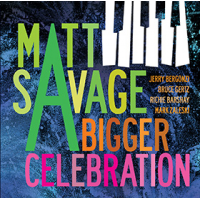 Pianist / composer Matt Savage's career has been on an upward curve since he recorded his first album—before his tenth birthday! Now twenty-one and a recent graduate of Boston's Berklee School of Music, Savage and his trio have released their tenth album, A Bigger Celebration, this one employing the services of some heavy-swinging guest artists including the celebrated tenor saxophonist Jerry Bergonzi.

A child prodigy? Without a doubt. A remarkably talented jazz musician? Ditto. Diagnosed at age three with pervasive developmental disorder, a form of autism, Savage overcame an early aversion to noises or music, teaching himself to play piano at age six. Less than two years later he had recorded a demo album, One Is Not Fun, But 20 Is Plenty, to raise funds for autism research. Soon afterward he met bassist John Funkhouser and drummer Steve Silverstein and they formed a working trio, releasing their first commercial album, All Jazzed Up, when Savage was nine.

Because of his unusual life story, Savage has been written about in publications from Time and People magazines to Jazz Times and Jazziz, has been interviewed on national radio and television programs, performed with jazz legends from Dave Brubeck and Marian McPartland to Clark Terry, Chick Corea and Wynton Marsalis, among others, and has appeared at Carnegie Hall, the Kennedy Center, and at concert halls and festivals all over the country and abroad. Through it all, Savage has kept his feet firmly on the ground and his eyes on the goal: to become the best jazz musician he possibly can. A Bigger Celebration marks another step forward in that never-ending journey.

But what about the music? you ask. Ah yes, the music. Savage wrote and arranged all of it, showing time and again the range and maturity he has acquired from more than decade of writing and performing while laying bare his growing perception and fluency as a pianist. Bergonzi, whose muscular solos are always a pleasure to hear, is a valuable resource, as are bassist Bruce Gertz, drummer Richie Barshay and another welcome guest, saxophonist Mark Zaleski, who adds his expressive voice on alto ("Some Beach Somewhere") and soprano ("Howler Monkey"). Savage's tunes may not be unique but they are invariably pleasant and easy on the ears. Among those not already cited, "Dream of the East," "Power Pop" (two versions) and the ballad "12:03 AM" are especially engaging. There's an eleventh (unlisted) track on the CD, Johannes Brahms' "Lullaby," performed by Savage alone.

So what lies ahead for the (former) wunderkind? At the moment, Savage is pursuing a masters degree from the Manhattan School of Music. After that, based on what he has accomplished so far, the sky would seem to be the limit.