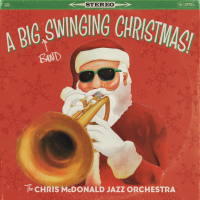 A Big (Band) Swinging Christmas! is at least the tenth holiday album recorded by the peerless arranger Chris McDonald's impressive Jazz Orchestra—but the first one whose title has been amplified by an exclamation mark. Could it be that this one is extra-special? That's hard to say, as the albums that preceded it have all been remarkably well-designed and pleasurable. And yet... there is that exclamation mark.

Before proceeding, it should be noted that McDonald is a maven who specializes in recasting Christian hymns, carols and other sacred music into a jazz format, a conversion he has been undertaking with considerable success for more than two decades. If that seems a daunting task, McDonald makes it look and sound ridiculously easy, something he has been doing since the release of Big Band Christmas in 1996 and Big Band Hymns a year later.

Truth is that in the proper hands any musical genre lends itself to a jazz translation, and McDonald's hands are indeed suited to the task, so much so that his holiday CDs are worth spinning and enjoying all year round, even though there is nothing on the bill of fare that the average listener hasn't heard hundreds if not thousands of times before. Yes, that includes such relative newcomers as "Rudolph the Red-Nosed Reindeer" and "What Are You Doing New Year's Eve?" as well as more traditional themes such as "Joy to the World," "Hark! The Herald Angels Sing," "Angels We Have Heard on High," "Deck the Halls" and "The First Noel."

Pat Coil's Hammond B3 organ, Steve Patrick's trumpet and Mark Douthit's alto sax underline McDonald's shuffling arrangement of "Good Christian Men, Rejoice," while trombonists Roy Agee, Roger Bissell and Barry Green share the spotlight on a "Sing Sing Sing"-like reworking of "The Holly and the Ivy (and the Bones") with drummer Bob Mater sitting in for Gene Krupa. The orchestra's able vocalist, Matt Belsante, is out front on "Let There Be Peace on Earth" and "New Year's Eve." Other soloists of note are trumpeters Rod McGaha, Jim Williamson and Steve Patrick; tenor saxophonists Jeff Coffin and Doug Moffet, pianist Coil and guitarist Lindsey Miller. Good as they are, however, it is McDonald's superlative charts that carry the day.

As for that exclamation mark . . .there are those who swear they heard McDonald exclaim, as he rode out of sight, "Merry Christmas to all... it's a swinging delight!"

Joy to the World; Hark! The Herald Angels Sing; Here We Come A-Wassailing; Rudolph the Red-Nosed Reindeer; Let There Be Peace on Earth; Good Christian Men, Rejoice; What Are You Doing New Year’s Eve?; The Holly and the Ivy and the Bones; Angels We Have Heard on High; Deck the Halls; The First Noel.