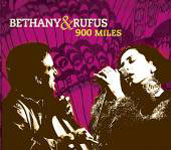 At the celebrated and celebratory New Orleans Jazz Festival, a walk through the fairgrounds is an astonishing experience as the strains of myriad musics come together in the air and everything feels connected. The same feeling is to be had from the debut album by Bethany Yarrow and Rufus Cappadocia. With a minimum number of voices—guitar, cello, vocal and some percussion—the duo creates colors and textures that suggest a world of musics coalescing.

Yarrow is the daughter of Peter Yarrow of Peter, Paul and Mary and so we might expect that she'd have a sense of the folk tradition, but what she does with and to that tradition is nothing short of brilliant. Her voice is rich, dark and true and in this quiet and simple framework it cuts right through to express all that the music needs. But somehow she goes beyond and makes more of these mostly traditional folk songs.

She has the rhythmic sensibility and depth of feeling to call forth the jazz and blues tradition and the breadth of textures to take a listener around the world. Her voice blossoms in extraordinary ways. "St. James Infirmary could be located in any place where there is loss—it's a bleak, lonely place but, alas, we want to go back there. And the duo follows that grimly rich story with Jesse Winchester's almost rollicking "Isn't That So —a sassy response to a jealous and angry divinity. Yarrow's voice is stark and powerful, feeling both informed by years of tradition and yet brand new.

Cappadocia plays a specially designed electric cello and often provides the bass complement to Yarrow's striking vocals. His pitch and timing are right on the money—hear how he blends the two in amazing fashion on the Reverend Gary Davis' "If I Had My Way —everything he does rocks the foundation and pushes the story forward. No produced band could sound more powerful or more right. And then he moves Phil Ochs' gorgeous "No More Songs in quite a different way, revealing the funereal march qualities with a steady pulse and a heartbreaking arco solo.

This is American music that reaches out to invite and include so much more. Most of the songs have a sad undercurrent and yet at the hands of these two artists they emerge as shining songs for a new time.

900 Miles; East Virginia; Linin' Track; The Swallow; St. James Infirmary; Isn't That So; If I Had My way (Samson and Delilah); No More Songs; Forgiveness; Asturiana.

About Bethany and Rufus