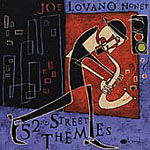 While Joe Lovano has played some decidedly non-mainstream music during his career, this record is a powerful reminder of the tenor giant’s debt to the tradition. Still, the music has that unmistakable Lovano edge. Joined by what is in essence a small big band, Lovano pays tribute to the legendary players and composers of the bebop era, with a concentration on the great Tadd Dameron. Willie "Face" Smith (not to be confused with the famed altoist who died in 1967) wrote the orchestrations.

Not every track features the full nonet. Strayhorn’s "Passion Flower" is a duet for Lovano and pianist John Hicks. Lovano plays Dameron’s "The Scene Is Clean" with only the rhythm section behind him. "Charlie Chan," a Lovano original based on "Milestones" changes, features a three-tenor duel between the leader, George Garzone, and Ralph Lalama. An up-tempo "Sippin’ at Bells" features a sextet with the frontline of Lovano, trumpeter Tim Hagans, and altoist Steve Slagle. And Lovano is unaccompanied on his own "Abstractions on 52nd Street," which segues directly into a full-throttle version of Monk’s "52nd Street Theme." The nonet is at its best on lushly orchestrated numbers such as "If You Could See Me Now," "Whatever Possess’d Me," and "Embraceable You."

If You Could See Me Now; On a Misty Night; Sippin' at Bells; Passion Flower; Deal; The Scene is Clean; Whatever Possess'd Me; Charlie Chan; Theme for Ernie; Tadd's Delight; Abstractions on 52nd Street; 52nd Street Theme; Embraceable You.