BY ELLIOTT SIMON
December 25, 2005
Sign in to view read count 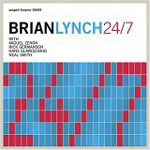 Whether it's found alongside Latin piano great Eddie Palmieri or fronting his own band, Brian Lynch's trumpet can appropriately alternate between sweet subtleties and potent power in a way that makes any tune special. That thrilling feeling is brought into the studio on 24/7. Fresh from the road, Lynch takes his working band of altoist Miguel Zenon, pianist Rick Germanson, bassist Hans Glawischnig, and drummer Neal Smith through a varied program of new music and standards that showcases Lynch's fiery horn in the context of the group's hard bop edge.

Lynch and Zenon dance exceptionally well together on the trumpeter's "210 Centre St., a swingin' downtown address if there ever was one, everyone giving each other plenty of solo space before coming back together to reprise the melody. The leader's remaining compositions have Germanson, Smith, and Glawischnig defining the mysterious crux of "The Magmillion Caper through angular lines, exhibiting Lynch's muted Latin facility on the beautiful "Afinque, and all burning from start to finish on the title cut. Germanson and Glawischnig each add their own pieces to the mix; the pianist's "Game Theory specifies its own particular Latin tinge amidst fast-paced bop, while the bassist's "Beholding comes across as a lovely evening ending ballad.

In addition, Lynch gives Satchmo's classic opening notes to "West End Blues their due respect allowing all the players, but especially Zenon, ample opportunity to blow the blues, while the delicate buds of Ellington's "Azalea gorgeously flower as they are lovingly nurtured by Lynch's sweet tone. With novel takes on the Isley Brothers' "Who Loves You Better, Jerome Kern's "Nobody Else but Me, and Jimmy Webb's "By the Time I Get to Phoenix rounding things out, 24/7 makes wonderful company at any hour.

210 Centre St.; Who Loves You Better; Nobody Else But Me; Azalea; The Magmillion Caper; 24/7; West End Blues; Afinque; Game Theory; By The Time I Get To Phoenix; Beholding.