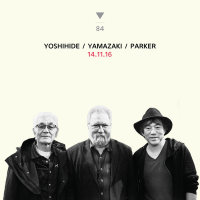 Cafe Oto is one of the most important venues for free improvisation and avant-garde jazz in Europe, with an intelligent programming that often focuses on ad-hoc pairings and special projects. The London venue also has a record label, Otoroku, with a small but already impressive catalogue on LP and CD that expanded considerably after the launch of its digital branch. In November 2016, Cafe Oto organized a concert by the Otomo/Yamazaki duo, and invited a master of free music, Evan Parker, to join the group for an unprecedented encounter, now documented in this digital only album.

Both Evan Parker and Otomo Yoshihide need no introduction: Parker is one of the pioneers of free improvisation in Europe and one of the most influential saxophonists of the last fifty years; Otomo's many talents and relentless musical curiosity have few equals in contemporary free jazz and improvisation circles. The real surprise here is the powerful and inventive drumming of Hiroshi Yamazaki, an almost forgotten figure of the early Japanese free jazz scene and a collaborator of both its most emblematic characters, Kaoru Abe and Masayuki Takayanagi.

The first part of the album is a duo improvisation by Otomo and Yamazaki. They offer a fresh perspective on the possibilities of the guitar-drums combination, dispensing from the most obvious interactions for a study on pure sound and contrasting textures, where unusual percussive dynamics and guitar feedback diversions meet in unexpected ways. The second track, comprised of two distinct parts, is by the duo of Yamazaki and Parker. They immediately demonstrate a strong affinity, engaging in an adventurous dialogue that alternates between well-defined rhythmic constructions and sudden suspensions, dizzying saxophones lines and sparse metallic accents. Their improvisations have such a remarkable structural identity and improvisational fluidity that sound like the creations of a long-standing duo.

The third track, divided into three separate sections, is by the whole trio. There's a palpable sense of discovery here, the musicians clearly enjoying the possibilities of the encounter, its contrasting aspects and contact points. The first part begins with a sparse droning soundscape that soon leads to a tight collective exchange, growing in intensity through labyrinthine saxophone lines, distorted guitar and cascading drums. The piece then develops in different instrumental combinations, incorporating space and silence as building blocks for a continually evolving musical dialogue. In the second part, Otomo comes to the fore with skillfully controlled waves of feedback and slashing guitar lines, supported by Yamazaki's dense drum patterns, then slowing down for Parker's entrance, his confident phrasing and full-bodied sound eventually leading to a magnificent coda of deep resonant guitar tones, rattling metal percussions and sinuous sax meditations. The final encore then sums up the whole performance in a riveting improvisation that moves from diffuse tonal color investigations to the dense, noisy wall of sound that closes the album.

14.11.2016 perfectly illustrates the universality of free improvisation, its ability to connect distant worlds and different personalities in a constantly engaging, adventurous spontaneous creation.