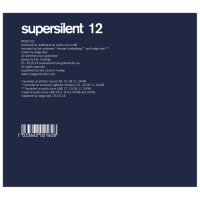 There is a widely-used saying about London's famous red buses, "You wait ages for one, and then three turn up at once..." Back in the autumn of 2010, it seemed as if it could equally well apply to Supersilent releases. After the quartet's first four albums were all released in 1997-8 (1-3 as a triple, then 4 on its own), by 2009 only four more (plus the DVD 7) had been released since the turn of the millennium, usually with a two-year gap between them. Yes, Supersilent fans had learned not to be impatient.... But then in mid-2010, Rune Grammofon announced that three Supersilent albums— 10, 11 & 12—would be released in quick succession. As promised, 10 appeared on CD, followed shortly afterwards by 11 as a vinyl-only release (in 2014, it was also released on CD), and then—nothing else, no sign of 12... until now, four years later. At least the average gap between Supersilent releases has been restored to two years.

Prior to that flurry of releases—specifically, in between 8 (Rune Grammofon, 2007) and 9 (Rune Grammofon, 2009)—Supersilent had evolved from being a quartet to a trio, with the departure of drummer and founder member Jarle Vespestad leaving trumpeter & vocalist Arve Henriksen, keyboardist Ståle Storløkken and guitarist & producer Helge Sten (a.k.a. Deathprod). That change had a dramatic impact on the group, one which is still being worked out. Their initial reaction was to record the anomalous oddity 9 on which the three surviving members all played Hammond organs, using them in imaginative, innovative ways. In comparison, the quieter, more acoustic 10 may have been a better indication of the trio's future direction, although the jury's still out on that. The fact that 11 was not a trio recording, but consisted of unreleased recordings with Vesperstad, rather blurred the transition from quartet to trio.

According to Rune Grammofon, 12 was actually recorded at three different sessions in 2011 (which explains why it was not released immediately after 10 and 11 in autumn 2010!) and produced by Deathprod from hours of recordings. Rather than the extended improvisations which "hours of recordings" suggests, 12 consists of thirteen tracks which range in length from one-minute-and-a-half to just under six minutes. It seems as if Deathprod's production tasks must have involved selecting appropriate extracts from the hours at his disposal, tidying them up and integrating them into a coherent whole. If so, he has done a commendable job; every track here has at least one feature to recommend it, so that none of them could reasonably have been omitted. On different tracks, those outstanding features include attention-grabbing solos from all three members, moments of transcendental beauty from Henriksen, passages of near telepathic communication between the three and—in classic Supersilent fashion—some intimidatingly powerful and awe-inspiring uses of effects that belie any suggestion that the group has gone "unplugged."