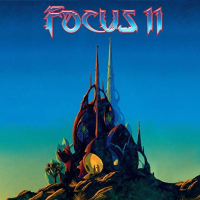 If the artwork looks familiar, yes, it's by Roger Dean who created album cover artwork for progressive rock icons, Yes, Gentle Giant, Uriah Heep and other notables. Dean continues his phantasmagoric images via his work for this pivotal 1970s and 80s Dutch prog unit, Focus for its 11th studio album, featuring founder Thijs van Leer (keys, flute) and original drummer Pierre van der Linden. Newer member Menno Gootjes admirably handles the guitar throne, once held by poll-winner, Jan Akkerman, and bassist Udo Pannekeet injects a corpulent and fluent bottom end into these buoyant pieces. Moreover, there have been several lineup changes over the years, but this ensemble has been intact since 2016.

Van Leer no longer yodels, famously evidenced on the band's classic album Moving Waves (Sire, 1971), featuring their seminal hit, "Hocus Pocus." Like many early prog ensembles, Focus integrated classical art-forms into its diverse arsenal, yet incorporated a captivating brew that merged hummable themes, aggressive soloing, multipart song-forms, and van Leer's dazzling flute passages. And while there are not many works here that may withstand the test of time, or for that matter, count among the band's most iconic oeuvres, 11 is more of a hard-driving progressive rock album with signature soundbites that hearken back to the original band's constitution.

The opening track "Who's Calling?" intimates a nod to early Focus' zinging, rapidly paced motifs, complete with guitarist Menno Gootjes' Akkerman-like extended notes and hyper-mode licks, culminating into a regal melody with knotty unison choruses. Although they shift the flow with a sparky funk groove on "Heaven," featuring van der Linden's booming polyrhythmic beats and Van Leer's classical overtures on keys and flute, where they fuse another stately theme into the mix. Van Leer also overlaps dark, wistful flute passages into many of these comps amid somber treatments and melancholic milieus. On the flip side, his rather nondescript vocals atop an uninteresting theme during the mid-tempo rocker "How Many Miles" adds little or no value to the production.

Subtle harmonious content becomes more prominent on subsequent listens. However, several works are executed with intricately arranged prog outbreaks, complete with tricky maneuvers and the soloists' spiraling riffs and high-flying dynamics. In addition, the influential drummer stretches out a bit on the bumpy and bulbous "Palindrome," whereas "Mare Nostrum" boasts an anthem-style, guitar-driven arrangement, blossoming into a full-steam-ahead jam. It's a piece that sounds like a concert closer. And "Final Analysis" communicates a hint of vintage Focus, sweetened by Van Leer's tuneful piano phrasings. In sum, the musicians' modus operandi is firmly rooted in prog rock as the production places an emphasis on hard-hitting sorties, dappled with traces of the early years, but primarily leans toward a new direction without letting the past guide them into the future.