By ERNEST BARTELDES
August 10, 2010
Sign in to view read count 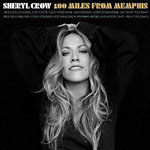 On 100 Miles from Memphis, singer/songwriter Sheryl Crow pays homage to the Memphis soul sound that deeply influenced her as she grew up, literally "100 miles from Memphis," in her native Wisconsin. The disc kicks off with "Our Love Is Fading," an up-tempo, horn-heavy rocker that might just become the album's first hit single. The relaxed reggae tune, "Eye to Eye," follows with lyrics about the end of a love affair—a recurring theme for Crow. The Rolling Stones' Keith Richards guests, contributing guitar and "gang vocals" to the track, alongside co-writer Doyle Bramhall II, who plays throughout the disc.

The disc contains several tunes that fit right into Crow's style, including the upbeat "Summer Day," a tune about letting love happen without worrying about might come tomorrow. The tune is beautifully enhanced by strings conducted by Suzie Katayama, which add to the song without getting in the way. "Long Road Home" has a gospel-inspired flavor, but keeps things simple with a straightforward acoustic and vocal backing. Crow then delves into politics on "Say What You Want," which openly criticizes the views and ways of "talking heads and jihad Janes."

Though have been her forte on previous album, here she sounds a bit unconvincing on "Home," a tune about looking back and regretting the end of a love affair. However, the up-tempo title track—looking back on Crow's youth and the decision to leave her small-town life to pursue her dreams—shines; melancholy, without being sad.

100 Miles from Memphis also features two covers: the first, an update on Terence Trent D'Arby's "Sign Your Name," with brilliant harmony vocals from Justin Timberlake; and the disc-closer, "I Want You Back," a tribute to the late Michael Jackson played exactly like the Jackson Five original.

Though 100 Miles from Memphis does not have the brilliance of discs like Sheryl Crow (A&M, 1996) or C'Mon, C'Mon (Interscope, 2002), it is a highly enjoyable disc with quite a few memorable moments worth quite a few spins.

Our Love Is Fading; Eye To Eye; Sign Your Name; Summer Day; Long Road Home; Say What You Want; Peaceful Feeling; Stop; Sideways; 100 Miles from Memphis; Roses and Moonlight; I Want You Back.