By NENAD GEORGIEVSKI
October 15, 2015
Sign in to view read count 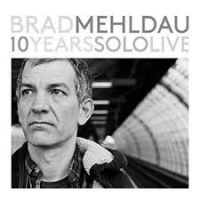 It is interesting how solo piano performance holds a special, privileged place in jazz music. What is even more interesting is how artists have gone to renew this format over and over again as time went on. Along the way they have expanded the language of improvised music by exploring novel paths of thematic developments. An entire lifetime can be spent on understanding how a single instrument like the piano can be re-used and re-planned in variously different contexts in one single genre known as jazz. In the world of jazz, there is a constant fight for every musician to carve out their own way or their instrumental niche, something that would make them distinct from the others. Some are born to greatness and have that innate gift, some work hard to achieve it while others never really achieve that.

Pianist Brad Mehldau clearly belongs to the first group of artists. Mehldau is an artist with wide ranging interests and tastes, and cryptic insights as well. No contemporary pianist more brilliantly established himself through an extraordinarily distinctive identity than him. Clearly influenced by someone like pianist Fred Hersch, someone with a broad tastes for music and who has opted for emotional impact than dry virtuosity, the world of Brad Mehldau is full of exploration and expansive efforts which has found him working in various formations within the jazz spectrum and beyond. Starting from Elegyac Cycle, (Warner Bros, 1999) a conceptual solo piano effort, this format seems to be one of those riskier efforts he has excelled in, along with the famed trio he often performs with. More and more, he emerged as a player with a stunning virtuosity and daring ability to mine far reaches of improvisation.

Selected from solo piano performances in various cities in Europe over a period of 10 years and spread to 4 CDs or 8 vinyls, pianist Brad Mehldau's 10 Years Solo Live is an outstanding achievement. Conceptually divided into 4 groups or divisions, "Dark/Light," "The Concert," "Intermezo/Ruckblick" and "E Minor/E Major," these sets reveal the wide-ranging tastes and his abilities as a performer and interpreter. His musical world is a world where rich confluences of jazz history, classical and popular music mesh together and come out in a very unique and contemporary way. In a way, the songs and compositions in each group form a suite follwoing their own inner logic.

Jazz has always been music that was energized by tensions between tradition and innovation, causing heated debates and inspiring some astonishing music along the way. Most of the selections he has chosen are obviously far from classical jazz repertoire and it's a mixture of originals and a plethora of other stuff. It is interesting how Mehldau's instincts are informed not only by jazz and classical music, but pop and alternative rock, finding inspiration from vast corners of modern popular music. Obviously, he is a man of many signatures, all written in disappearing ink. Mehldau's choices of including modern marvels such as indie band Verve's "Bittersweet Symphony," Pink Floyd's "Hey You," Massive Attack's "Teardrop," or Nirvana's "Smell Like Teen Spirit," to name but a few tracks from his vast repertoire.

The outcome is so compelling as Mehldau successfully blurs the lines, by making this music uniquely his own. He immerses so much in this music by valorising technical astonishments as a means to an end, while delivering intangible and mysterious rewards and accomplishments. It's almost as he has written all of this music, and in a way he has. Conceptually, regardless of the source, the music that emanates stampedes, tiptoes, pirouettes, punches, propels and seduces. Also present are equally creative interpretations of music by pianist Thelonious Monk, classical composer Johannes Brahms, saxophonist John Coltrane, singer and composer Brian Wilson, or by group Radiohead.

With well over 300 minutes, it is obvious that the selections were carefully curated. What is evident is that Mehldau is completely immersed in the emotional landscapes that these songs offer. He is an engaging, playful, elegant and erudite improviser. What he gives emphasis on is more to emotional content rather than dry virtuosity or craft. Every track is a world on to its own and Mehldau expertly shows his prowess throughout. This would result in lengthy improvisations and reconstructions. For eg. The Beatles' "And I Love Her" and Jeff Buckley's "Dream Brother" are originally 3 to 5 minute pop songs and when they get performed by Mehldau they elegantly unfold into 13 to 16 minute tracks.

The way he interprets and stretches these songs it often resembles an aural representation of complex clockworks. He has a phenomenal capacity to play complicated music with astonishing clarity and liveliness. Actually, this creative process resembles a sort of musical stream of consciousness. Yet, Mehldau remains faithful to these songs' original innate essence. He gives every indication of being a mind at work, not just a fleeting pair of hands. His hands are in constant motion with his keystrokes flowing like rivulets into a mighty river. Even though his approach triggers a wealth of ideas, the larger picture is always kept in view. His technique really allows to forget technique entirely and the songs sparkle with invention in this setting. Often he shows grace and elegance as he takes the melodies into uncharted territories.

10 Years Solo Live doesn't feel like a compilation of selected performances put together, but the whole repertoire flows into a complete whole. Somehow these sound like a free-flowing single works. It's a beautiful release/box from a unique pianist who continually shows what the piano can do.