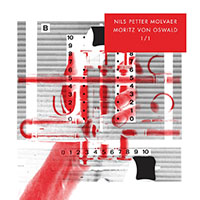 With the breakup of his trio responsible for the superb Baboon Moon (Sula, 2011), it's been a fair question to wonder: what's next for Nils Petter Molvær? One possible answer is certainly 1/1, the Norwegian trumpeter's debut with German multi- instrumentalist and influential techno producer Moritz von Oswald and his nephew, Laurens. The trio's debut performance at Kristiansand, Norway's 2013 Punkt Festival, while strong, was largely misleading; the show certainly occupied some of 1/1's more ethereal territory, but Molvær and his partners also traveled to far more beat-driven, danceable terrain.

Better, perhaps, for live performance, but being a studio concoction, 1/1 is considerably darker, and all the better for it. Molvær has been playing a lot more unprocessed horn lately, though here it's often drenched in reverb to expand its place in the soundscape. On the opening "Noise 1," a dark synth undercurrent provides the spare context over which Molvær improvises, leading to a final repetitive motif imbued of both the trumpeter's intrinsic lyricism and beautifully pure tone. "Step By Step," on the other hand, is more pulse-driven, initially predicated on a simple synth bass line and some spare electronic percussion. More hypnotic than dance-inducing, as the von Moritzs gradually build the track with nearly imperceptible additional layers, Molvær patiently builds a thematic overlay, providing a clear focus all the more compelling for the long spaces he leaves, creating a terrific sense of tension released only when he reenters.

The set's longest track, "Transition," returns to more brooding terrain. There's a pulse, yes, but soft and subtle, buried within the synth wash that provides the shape and, for Molvær the context. It assumes even more form as a deep bass line emerges, though the composition's harmonic center still retains a somber mood. It's hard to know how much of 1/1 was preplanned and how much was in-the- moment, but there are moments, especially during "Transition," where everyone seems in perfect synch: it's not always the trumpeter following the von Moritzs' synth colors and harmonies; there are times when the keyboardist(s)'s appear to respond to Molvær as well. While the trumpeter's tone is largely clean and pure, there are effects, the only question: is it Molvær In real-time or post-production?

That Molvær is comfortable enough in his own skin to avoid virtuosity for its own sake—instead, focusing heavily on tone, melody and the responsive demands of participating in a trio—is part of what has made him so successful. He possesses chops-a-plenty, and the sophistication of his melodic ideas suggests a deeper harmonic language. But the music comes first, and Molvær's attention to space and tonality has resulted in a distinct voice recognizable from the first note. 1/1 may be a sidestep for Molvær or it may be the first of an ongoing collaboration. One more question to be answered, but in the meantime, 1/1 is a compelling debut from a still-nascent relationship that commands attention, but not through obvious means. Instead, 1/1's marriage of Oswald and Laurens von Moritz's brooding electronica with Molvær's intricate melodism makes for a surprising, late-in- the-year sleeper hit.