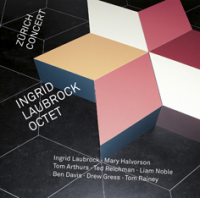 Even though numbering just eight strong, Ingrid Laubrock makes such skillful use of the talented cast at her disposal on Zurich Concert that the band delivers an almost orchestral experience. She achieves that through the deployment of three chordal instruments in Mary Halvorson's guitar, Liam Noble's piano and Ted Reichman's accordion. Not that you would characterize the music as overly dense. Laubrock exploits the possibilities inherent in her unusual line up to the full. Not everyone plays at the same time and novel combinations abound in an extended work of serious compositional intent, manifest in a suite like structure which mixes complex notation and room for improvisation.

Laubrock composed the charts during a week-long workshop at the annual NEWJazz Meeting in Baden-Baden, Germany in 2011. It gave her an opportunity to bring together collaborators from her burgeoning presence on the New York scene with those from the UK who had been part of her first large ensemble, the punning Nein. While the German has built her reputation as a distinctive voice on tenor and soprano saxophones and a compelling improviser, her writing is no less formidable and the seven numbers here share with her work for her group Anti-house an enigmatic and idiosyncratic shape, suggesting musical riddles. Even though the final studio cuts from the workshop were faultless, Laubrock chose to issue the versions recorded in concert in Zurich, at the end of a four day run: a wise decision as by now the octet thoroughly inhabits the work and brings the scores to life, adding spontaneity and freshness even to the most intricate sections.

Laubrock draws on materials from jazz and beyond to evoke specific moods, and is not afraid to take her time doing that. So on the opening "Glasses," six of the eight musicians create a mysterious shimmering sustain on tuned water filled glasses. That's followed by the slow-moving "Novemberdoodle" in which Reichman's accordion drone becomes increasingly punctuated by outbursts from the remainder of the unit, before shifting into "Blue Line & Sinker," an unruly showdown with Tom Rainey's xylophone. Thereafter the action comes thick and fast. Halvorson introduces "Chant" with an inventive unaccompanied spot before the piece veers between the stately and the tempestuous.

Although involved interaction also distinguishes the largely scripted "Matrix" there is still space for a playful coupling between Tom Arthurs' trumpet and the leader's straight horn. However her most impassioned outing comes on "Nightbus" rising out of an earthy duet with Rainey's drums, while later in the same selection Noble contributes a choppy solo over a Latin-tinged groove. Reprising the initial gambit with the glasses, the concluding "Zauberberg" moves from pointillist mutterings to a collective refrain which sounds as if it could go on, long after the music actually ceases. Overall the work convinces as a stimulating listen which repays time invested, and highlights another fertile outlet for Laubrock's wide ranging artistic expression.