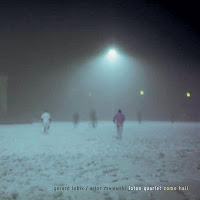 In the manner of a heart-to heart conversation defined by leisurely pace and thoughtful exchange of views, the Polish Foton Quartet navigates its way through a loosely lyrical though unscripted 59-minute program. None of the participants are well-known outside their home country, but that might not stay the case for long, based on their strength as a unit; full of sensitive listening which puts the group first, there is empathy in abundance here. While placement and color of sound is important, they reside within the jazz vernacular, even slipping into tempo at times, slightly melancholic though with barely a trace of the blues. Oceanic currents come to mind as lines drift to and fro, coming together and apart within the overall tide.

On tenor saxophone, Gerard Lebik adds occasional eastern European harmonies, and expands into squawks when the backing becomes heated. Often in tandem with Artur Majewski's poised trumpet, the reedman spirals into animated convocation. Both horns lodge predominantly in the conventional registers, making their impact more through what they say than how they say it. For bassist Jakub Cywinski and drummer Wojciech Romanowski, responsiveness appears the prime concern, both proving particularly attuned to Majewski's riffs and flurries. All convince as technically assured, and though lacking that distinctive edge which separates out the upper echelons, their perfectly judged contributions—knowing when to play and when not to play—make for subtle but purposeful communion.

Each of the six cuts traverses a lot of ground, offering ample space for the foursome to stretch out. By way of example, on "Five," the longest piece, Cywinski's sinewy pizzicato intro leads into relaxed dialogue with the horns, before Romanowski's unhurried and spacey percussion shadows meandering contralto clarinet. Later he sparingly accompanies another darkly voiced bass feature, eventually joined by limpid trumpet and clattering percussion. But it's not all quite so mazy: the short concluding "Six" provides an emphatic and spirited finale.