By Nenad Georgievski
April 27, 2010
Sign in to view read count 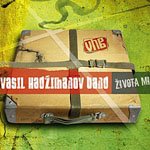 The figure of Joe Zawinul casts a long shadow in the world of jazz, with plenty of artists finding inspiration in the broad spectrum of his work. Vasil Hadžimanov Band, one of Serbia's leading jazz acts, is led by an artist whose work and imagination is fueled by Zawinul's music, and has come a long way in the process of finding his place in the jazz field. Coming from a musical family with a rich background surely has helped in his musical upbringing, but it's his enduring and uncompromising commitment to music that has secured him a devoted fan base and praise. The band's first two albums were primarily fusion, but were hindered by poor production, portraying the band's skills but not showing anything beyond that limited genre. The band's third album—Sega mu e Majkata (PGP, 2008)—was a new chapter, both in terms of production and composition, but Života Mi (I Swear On My Life) takes a quantum leap forward in both quality and maturity.

A gifted keyboardist, Hadžimanov (the band's leader and composer) balances the fiery tendencies of the classic fusion era with his reflective, sometimes regal approach. Života mi is virtuosic in its execution; relentlessly rhythmic and unmistakably excellent. What makes it so great is his strong and increasingly mature writing, which provides a great basis upon which the players can build. Most compositions are in the four-minute range and, compared to previous pieces, are radio friendly.

The album roars to life with "Balkan tribes," an impressive mosaic of Balkan folk sounds backed by infectious grooves, gypsy melodies and virtuosic cimbalom swings, courtesy of Misel Kurina of Gyass Orchestra. In recent years, Hadžimanov has taken part in other ethnic jazz bands such as Bace Quartet and Balkan Wind; soaking up the experience there, he brings those sounds and rhythms back to his primary band. Backed by a combo, featuring a huge list of guests playing all kinds of instruments, it certainly adds a different flavor to the norm. The players are both technically adept and creative, and the whole combo delivers music with a nice variety in style and emphasis. There is also remarkable depth to the writing; "Martina Misteria" is a curious track with wonderful and playful guitar and flute interplay, while "Perdao" is a melodic, breezy vocal tune with contributions by Bisera and Senka Velentanić.

"Slankamen" is heavily influenced by gypsy melodies. The way the band interacts is a good example of a chemistry that permeates every corner of this album. It is unmistakably a jazz performance—harmonically daring, with the band stretching but not breaking the jazz envelope. "Space Virshla" generates a ribbon of tension and anticipation with its playful piano runs, while "Ahmad the Terrible" is a rhythmic rush of pure adrenaline.

With a beautiful blend of writing and playing Života Mi is Vasil Hadžimanov's most mature and fully realized album to date; breaking new ground without totally abandoning the past.