By Dan McClenaghan
January 31, 2016
Sign in to view read count 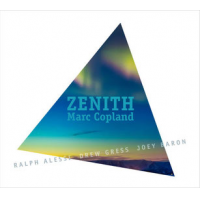 After releasing a series of excellent but under-recognized CDs on various small record labels—starting in the mid-1980s—pianist Marc Copland rose in prominence in 2006 when he took up residence on Germany's Pirouet Records. The highlight of his Pirouet days was a set of trio discs wrapped in a marketing package dubbed "The New York Trio Recordings." Modinha (2006); Voices (2007); and Night Whispers (2008), with a shifting set of band mates: Gary Peacock or Drew Gress on bass, Paul Motian or Bill Stewart drums, showcased Copland's skills to perfection. These discs attain the pinnacle of the very best piano trio offerings, ever, and they won for Copland some very well-deserved recognition. Copeland's sound in the piano trio is singular: he dips deeply into harmony, creating glistening chords and shimmering rhythms, a sort of diaphanous dream music so beautiful it's almost hard to believe.

Then there's Marc Copland teaming with horns, whether it's with saxophonist Greg Osby on Crosstalk (Pirouet Records, 2011), or with trumpeter Randy Brecker on Both/And (Nagel Heyer, 2006), the horn additions to his trio set-up changes his music, giving it a different momentum, more urgency, more gregariousness.

Zenith finds Copland with long time cohorts Drew Gress (bass) and Joey Baron (drums), teaming with trumpeter Ralph Alessi, for perhaps the best of the pianist's non-trio outings. It also finds him without the backing of a record company. Marc Copland has started InnerVoice Jazz, his own label.

Alessi, after releasing very successful records on the Clean Feed and CamJazz labels, has landed on ECM Records with Baida (2013), and in early 2016, Quiver. He is a consummate jazz man/improviser, with sideman slots in numerous recordings, sitting in with Drew Gress on Black Butterflies (Premonition Records, 2005), plus sets with Ravi Coltrane, Sam Rivers, Don Byron and Steve Coleman. He brings to Zenith a brashness and energy, a beautiful sense of abstraction.

"Sun at the Zenith" opens the disc with Copland's impressionistic melody. His piano is, as expected, gorgeous. The band floats. Alessi's open horn has a measured richness as it issues wandering lines that weave sinuously in and around the rhythm section. "Mystery Song," from the Duke Ellington songbook, 1931, doesn't sound Ellingtonian. It's a controlled tumult, a shifty, sneaky version, Copland's piano work sounding particularity inspired and on edge, with Baron and Gress injecting the sense of rolling, tumbling mystery.

The centerpiece, "Air We've Never Breathed," is a fourteen minute group improvisation, a sometimes playful, sometimes introspective rumination on Bill Zavatsky's poem, printed on the inside of the fold-out cover. "Waterfalls" is roiling rapids, an implacable rush of water. "Best Bet" brings in a beautiful ballad mood, and "Hurricane" begins gently, calm before the storm mode, then slow cranks things up to near gale force.

Zenith, Marc Copland's debut on his new label, meets all of the expectations his stellar work at Pirouet Records established.