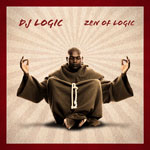 Four years since Ropeadope released The Anomaly, DJ Logic is back with an album every bit as cerebral and grooving. He works with a phenomenal roster of invited guests, and he knows how to pick his collaborators as well as his samples. Blending block-rocking beats, spacey dub, classic soul, raga-tinged grooves, stuttering Afro-beat horns and analog keyboard driven electro-funk, Logic's catholic tastes allow him to journey wherever an infectious groove may take him.

Breaking out of the instrumental mold, Logic invites rappers Creature and Sub-Conscious, as well as vocalist Latasha Nevada Diggs, to contribute one track apiece. The established tradition of guest appearances by vocalists and rappers on DJ records helps the average DJ avoid being overly repetitive by breaking up the instrumentals with a distinctive human vocal presence. This device may seem necessary for novices, but for Logic it merely demonstrates his magnanimous interest in collaboration.

Even without the vocal tracks, the album never sounds repetitive or monotonous, so diverse is its panorama of styles. Hopping seamlessly from genre to genre, Logic reveals encyclopedic knowledge of a number of styles from Afro-beat to dub.

Spinning and mixing beats on the wheels of steel takes adroit technical skills, like any other musical instrument. But combining all these elements into a cohesive musical whole takes compositional forethought. Logic's spinning skills are definitely beyond reproach, yet he is a conceptualist first, a technician second. With Zen of Logic, he joins the ranks of such luminaries as Kid Koala, DJ Spooky and DJ Shadow as one of the most astute DJs today.