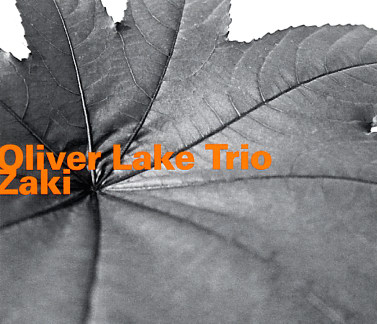 Reissued on the excellent grounds that it contains music which deserves to be listened to today, Zaki was recorded live at Jazz Festival Willisau in 1979. Although saxophonist Oliver Lake had been a member of soon-to-be festival favorites, the World Saxophone Quartet since 1977, he was still little known outside the U.S. and Willisau was one of his first important European gigs. In 1979 he performed there with WSQ and with his trio.

Both performances made Europe sit up and listen. Lake's trio with guitarist Michael Gregory Jackson and drummer Pheeroan akLaff had been working together since 1975 and by 1979 their astringent, rhythmically emphatic music—a blend of tightly arranged themes and freewheeling collective improvisation—was cooking.

The album starts with the fiercely uncompromising, free-meter title track, a headcharge for most of its 24 minutes, but which morphs into spacier territory, over a metronomic drum pattern, during its final section. At times Lake, in the left speaker, and Jackson, in the right, follow seemingly divergent paths, and then, without any apparent cue, lock together in passages of remarkable rhythmic and harmonic unity. All three musicians are each on mic pretty much throughout the track, as they are on the shorter "Clicker" and "5/1." The 15 minute "Shine," by contrast, features extended guitar and drum solos with Lake mostly out.

Lake is at the top of his game throughout, but the less well documented Jackson is every bit as interesting. Soon after this concert he quit jazz to pursue a more rock-oriented direction, as a singer and guitarist, which was marred by a succession of unhappy label relationships and which failed to take off. He began playing with Lake again only in 2004.

At Willisau, Jackson moves between edgy, clipped, rapid fire single note runs played with a deliberate lack of resonance, and bowed passages, heavy on the sustain pedal, during which he makes the guitar sound more like a keening viola or cello. In 1979, James Blood Ulmer's "harmolodic" style was carrying the cutting-edge guitar swing, but who knows, if he'd stuck with it, Jackson might have been equally influential. In any event, guitarist Bill Frisell has cited him as an early influence.

A welcome reissue, Zaki still sounds fresh and adventurous, and takes the listener to unexpected places.