BY ROBERT IANNAPOLLO
December 6, 2007
Sign in to view read count 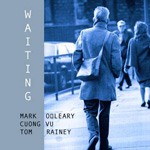 Early recordings by Irish guitarist Mark O'Leary put him in the impressionistic ECM camp, but more recent recordings and gigs with Paul Bley and Milford Graves show him drifting closer towards the avant-garde. Waiting, a set of free improvs inspired by Samuel Beckett with trumpeter Cuong Vu and drummer Tom Rainey, reinforces that view.

The disc opens with the title track, O'Leary on 12-string acoustic guitar playing ringing, arpeggiated phrases reminiscent of Ralph Towner. About midway through, first Vu, then Rainey enter and the three take off on a gentle roiling improvisation that develops in waves. But the comparative calm of that opening track is a bit misleading. As the disc progresses, the music becomes more agitated and aggressive. O'Leary switches to electric guitar and effects and feedback start to rule. Vu begins to work in his electronics. One might think this may lead to sonic overload but it's quite the opposite. Vu and O'Leary seem to view electronics similarly and they are a good match. With Rainey being an excellent textural drummer as well as rhythmic impetus, this is a trio of well-matched musicians.

The apocalyptic "Mr. Krapp's Neurosis is one of the disc's high points, an intense three-way improvisation with O'Leary's lines spiraling out in all directions, Vu's trumpet spraying fiery, electronic saturated lines and Rainey's drums meting out scattershot multi-directional patterns. It's pure chaos somehow melded into a cohesive whole. But even within this free improvisational framework, some tracks, such as "Estragon with its opening "statement and stop/start passages, sound like they are composed.