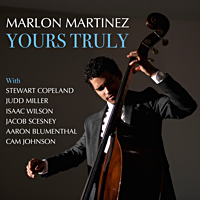 "Lock up your drummers, this bass monster will inflame them all!" This high praise for Los Angeles-based bassist-composer Marlon Martinez comes care of none other than legendary drummer Stewart Copeland who is featured on the young virtuoso's debut album, Yours Truly (Self Produced, 2019). A graduate of the prestigious Colburn Conservatory of Music in Los Angeles, Martinez is well-versed in both classical and jazz repertoires and has performed with and for luminaries from both worlds including Gustavo Dudamel and Ellis Marsalis among many others. He is a protégé of the incomparable Stanley Clarke, and studies with master and most-recorded jazz bassist in history Ron Carter.

If Martinez's credentials weren't enough to convince you that Copeland's praise was well deserved, the opening notes of the record's opener, "Jazz Marlonious," surely will. Less than a minute into his original composition—which recalls the bounce of Ahmad Jamal's take on "Poinciana" and the contemporary harmony of Dave Holland's "Claressence"—he launches into a bass solo which demonstrates both his impeccable technique and inexhaustible musicality. He then slips effortlessly back into the accompanist's role where he holds down the complicated changes for pianist Isaac Wilson's solo. Likewise, on "Invitation," Martinez again displays his technical facility as both an accompanist with rock solid time and clever and engaging interaction, and as a soloist whose limitations on the instrument are effectively nil.

The record is not your average straight-ahead jazz album by any means. "HD," which features Copeland and Judd Miller, is essentially jazz fusion and features a wealth of beautiful sounds from Miller's EVI and synths as well as driving rhythm-section playing from Martinez and Copeland. "Open Gate" is a hauntingly beautiful solo bass piece which demonstrates his masterful skill with the bow. Tunes like "Saint-Pierre-De-Maillé" and Stanley Clarke's "La Canción De Sofia" are played as piano-bass duets, further carving the textures and moods within the album.

Yours Truly is an absolute must listen for any fans of contemporary jazz as well as those on the look-out for up-and-coming players on the jazz scene.