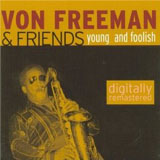 Still one of the best kept secrets in jazz—when he's referred to at all in the standard histories, it's usually only in passing, as the father of reed player Chico Freeman—Chicago tenor saxophonist Von Freeman deserves, instead, to be celebrated as a national treasure.

Freeman was, in his prime, a swing-to-hard bop stylist of extraordinary shamanistic power; a visceralist who preferred to play American songbook ballads, but cooked at fierce temperatures, drenched with the blues, and sprinkled with both the free-improv innovations of Chicago's AACM and the frantic, bar-walking aesthetic of the honking and screaming tenor school. There are resonances with saxophonists Gene Ammons, Big Jay McNeely, Roland Kirk and Ornette Coleman, but Freeman is a one-off.

The low profile Freeman endured during much of his career was partly of his own making. He rarely left Chicago and was content to make a living as a local gigging musician. He also spent long periods away from jazz. In the late 1940s and early 1950s, he played with such future Chicago luminaries as pianists Sun Ra, Ahmad Jamal, Muhal Richard Abrams and Andrew Hill, bassist Malachi Favors and tenor Fred Anderson. In the late 1950s, as employment opportunities for jazz musicians in the city declined, he played for strippers and in R&B bands. In the 1960s, he was entirely lost to the music, playing instead behind bluesmen Jimmy Reed and Otis Rush.

All these playing experiences came together to create Freeman's mature style when, circa 1970, he formed a jazz quartet (then, as on Young And Foolish seven years later, featuring pianist John Young). He was "discovered," aged fifty, in 1972 by Roland Kirk, who produced his first own-name album for Atlantic. But national recognition eluded him, and Freeman's subsequent recordings were for smaller labels.

Young And Foolish—seventy minutes of sonic sheet lightning, recorded in concert in Holland in 1977 and excellently remastered for this release—kicks off with a marathon, 26-minute reading of "I'll Close My Eyes," during which Freeman solos for close on fifteen minutes, at times lush and lyrical, at others broiling, multiphonic and intense. The title track is almost as long at eighteen minutes, with the brisk "Bye Bye Blackbird" the shortest track at just under ten minutes. "After Dark," the only explicit blues, is just over seventeen minutes. Each track is packed with incident and utterly compelling from start to finish.

A tour de force of rare and astonishing power, Young And Foolish is the stone favorite for this writer's Best Reissue Of 2007 And Then Some Award. They truly don't make them like this anymore.