By Bev Stapleton
February 1, 2007
Sign in to view read count 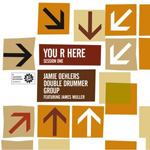 After years of neglect, it would seem as if the electric jazz of the 1970s is finally coming back into favour. With direct explorations of the Miles Davis legacy by Henry Kaiser & Wadada Leo Smith and Finland's UMO Jazz Orchestra, plus the creation of new music in this style by Wallace Roney, Dave Douglas and Uri Caine, the rejection of electricity by the neo-conservatives of the '80s has finally been pushed aside, opening up once-forbidden areas for fresh exploration.

Jamie Oehlers is an astonishing tenor player from Australia, already with a string of excellent solo discs and sideman appearances. On the two separately released CDs that make up You R Here, he leaps into that frantically creative late-'60s/early-'70s world, supported by Sam Keevers on piano and electric piano, bassist Rodrigo Aravena and two drummers, Simon Barker and Ben Vanderwall.

The double-drummer concept gives the recordings their particular character, sometimes setting up intense grooves with both kits interlocking or challenging one another, at others providing gentle colouring against the soloists in quieter moments. Several of the tracks have a Latin feel, aided greatly by the double percussion; elsewhere they provide the intense forest of rhythm of Black Beauty or Agharta.

The range of mood and feel that stretches across the discs is especially impressive. Keevers provides skewed electric keyboard playing on one track, switching to a lyrical, acoustic mode for Coltranesque ballads like "Departure. The energy level is raised further by the presence on some tracks of guests James Muller (guitar) and Scott Tinkler (trumpet). Muller's playing on "Just Out of Reach and "Side Car (mistitled "Wayne's World" on the sleeve) is a wonder of asymmetrical grooves and McLaughlinesque distortion; "Solace sees the unfolding of a solo of great tenderness. Tinkler has the listener fully attentive in each of his appearances.

On "Hat in the Cat he comes in as the third soloist, gradually building up to a peak of excitement, reacting against the thrilling commentary coming back from the drummers. Throughout, Jamie Oehlers proves his position as a player of international stature. The solo tenor opening of "You R Here explores the contours of the theme to come, creating false expectations of a Cuban extravaganza; in the fierce music that follows, Oehlers picks up from Tinkler in an extraordinary solo of great passion. Yet elsewhere, on "Solace and "Departure, he can play the tenor ballad with equal mastery.

These live recordings were made in 2006 at the Bennetts' Lane Jazz Club in Melbourne, a place which is gaining the sort of mystique of the Village Vanguard, 55 Club or Ronnie Scott's.

You R Here makes the storm-in-a-teacup "debate" about whether jazz has "changed address" from the USA to Europe even more irrelevant. Jazz now has multiple addresses. There's an incredible party going on in the one in the Southern Hemisphere. It deserves more visitors!

CD 1: Just Out Of Reach; Side Car; Solace; Portal; Wayne