Sal Mosca Quartet: You Go to My Head 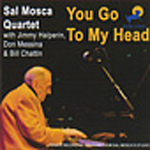 Along with the saxophonists Lee Konitz and Warne Marsh and guitarist Billy Bauer, pianist Sal Mosca was among the first wave of musicians to construct a personal style within the school of Lennie Tristano—in general a simultaneous commitment to the velocity of bop, the smoothly liquid lines of Lester Young and a linear exploration of harmony that expands on both. While he first recorded with Konitz in 1949, Mosca largely devoted himself to teaching, so that by the time of his death at age 80 (one year ago this month) he had released only a handful of recordings.

The music on this CD was recorded in Mosca's Mount Vernon, NY studio in February and March, 2004, with a quartet of relatively younger, like-minded musicians: Jimmy Halperin (tenor saxophone), Don Messina (bass) and Bill Chattin (drums). It's clearly convivial company for Mosca, one of the secret treasures of jazz piano, as the group negotiates a series of standards, Charlie Parker tunes and two Tristano-school classics: Marsh's "Background Music" and Konitz' "Sub Conscious-Lee."

There's a kinetic brilliance to much of what Mosca touches, whether it's flying runs and percussive punctuations or extraordinary two-hand inventions in which one seems simultaneously to shadow and expand on the other. Halperin is a fluid foil, playing tenor with an alto-like lightness of tone and there's often a sense of real collective invention—the friction of improvised counterpoint—in the music. It's increasingly unusual to hear a band that can find fresh harmonic inspiration in material as familiar as "Somebody Loves Me" and "How High the Moon," but Mosca and company consistently do it here.

Somebody Loves Me; You Go to My Head; Scrapple from the Apple; Sub Conscious-Lee; Nice Work If You Can Get It; I Can't Get Started; How High the Moon; Groovin' High; Background Music.