Salvatore Joseph Mosca was born in Mt. Vernon, New York, on April 27, 1927. The son of first generation Americans, Sal and his sister Dolores grew up during the harsh years of the Great Depression. The genre of Jazz music that had been stylized by blacks in New Orleans was rapidly spreading to an area of New York City known as Harlem, a predominantly black community formed from the great northern migration caused by World War I. Sal and jazz were destined to meet in the late 1930s at the vaudeville shows, nightclubs, and band performances of the era. Sal would become a major figure of the Free Jazz/Cool Jazz genre. Sal says that as a child of ten or eleven years he would watch the keys on the player piano as a role of music played and would try to figure out how to play it back

For years, cool-school pianist Sal Mosca labored as a student of Lennie Tristano, recording only sporadically. He avoided touring with top stars as their accompanist to be with his family and to teach his students. Before Mosca died in 2007, James M. Lester was able to make this wonderful short documentary—Sal Mosca (Un- Sung): To read ...

I've been thinking a lot about how jazz is taught recently. I realize now, my search for a real musical education was not a simple thing, but a series of life changing moments. My son, on the other hand, is planning to study music in college after he finishes high school. Though it would fill his ...

I've been around as a musician long enough to understand when a promoter or booker ghosts me. “Yeah, sure, send me an email," they say in that sincere way that sounds like someone saying, “Of course I love you" just to shut you up. It comes with the territory, and a musician has to be Zen ...

The Talk of the Town. Live at BimHuis

Label: Sunnyside Records
Released: 2015
Track listing:
CD 1:
Ghost of a Chance; Love Me or Leave Me; Sweet Georgia Brown; Stella's Blues/Donna Lee; Donna Lee; Gone with the Wind; Topsy; I Got Rhythm; Medley 1: Over the Rainbow/I Can't Get Started; Scrapple from the Apple; Cherokee.
CD 2:
Medley 2: Stardust/Dancing in the Dark/Too Marvelous for Words/I Cover the Waterfront/It's the Talk of ehe Town/Somebody Loves Me/I Never Knew/Lullaby in Rhythm; 2. Medley 3: Sweet and Lovely/The Man I Love/Groovin High; I'll Remember April/Limehouse Blues; Medley 4: All the Things You Are/A Night in Tunisia; Medley 5: Yesterdays/Sunnyside of the Street; 6. Tea for Two; 7. Love for Sale. 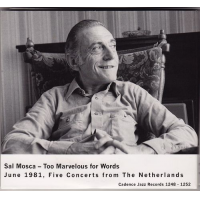 One of the most important collections of Sal Mosca's piano work has just hit the market. The five-CD package—Sal Mosca: Too Marvelous for Words (Cadence)—includes 56 tracks of the the pianist performing on tour in the Netherlands in June 1981. The material features five solo concerts by Mosca between June 19 and June 24 and gives ...

Sal Mosca: The Talk of the Town. Live at BimHuis

There is no such thing as a 'snow tiger.' The closest species that exists is the Siberian tiger but they are the same colour as their Indian cousins (white tigers are “circus-bred mutants" according to the BBC). So, you may ask, what does this creature have to do with a cross-generational collaboration between a pioneer of ...

Out today is a superb two-CD set of previously unreleased live solo recordings by pianist Sal Mosca at the Bimhuis in jny: Amsterdam on November 14, 1992. The recordings on Sal Mosca: The Talk of the Town (Sunnyside) come from the Mosca estate, and the sound is superb. The two CDs feature all jazz standards, like ...