Kim Waters: You Are My Lady 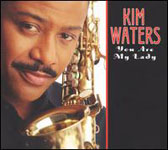 Miles Davis once said, "Don't play what's there. Play what's not there." But for Kim Waters playing what's there is what he does best. There isn't a single moment where anything close to spontaneous seems likely. Half of the ten tracks are cover versions of songs done before (and better) by the original artists. Reggie Lucas and James Mtume penned "The Closer I Get to You" for Roberta Flack and Donny Hathaway back in 1977, and then it was a supreme slice of slow dancing in the dark heaven. Thirty years later, Waters turns it into a paint-by-numbers version complete with limp vocal by Lisa Fischer that won't make anybody forget Flack.

If you're going to start your album with three consecutive covers, the least you can do is make them the strongest tracks, but not once does Waters catch fire. It's all just too laid-back and coldly professional instead of demonstrating any desire to put an individual signature to Ne-Yo's "So Sick," a big hit on urban radio, but probably more familiar to audiences that don't listen to smooth jazz, and a dead-on-arrival version of Marvin Gaye's club classic "Got to Give It Up."

Back in 1977, "Got to Give It Up" was eleven minutes and fifty-two seconds of unadulterated dancing adrenalin. It was one of those tunes guaranteed to get 'em off the wall and on the floor. Waters speeds up the rhythm, throws in some squawking synth lines, ersatz party noise and turns Gaye's disco smash into just another funk-less duplication.

Waters fares better on his own original songs. Probably because they don't suffer in comparison to the original as he dutifully serves up trite versions of Natalie Cole's "Inseparable" and Freddie Jackson's "You Are My Lady." Just like a bus driver hitting all his usual stops on his route, Waters gets in, blows a few blasé notes and gets out before the listener nods off in total indifference.

The success of any fast food franchise is in how well they can replicate a formula. Never mind if it's bland and tasteless. Just find something that works and can be repeated over and over. The same goes for Waters. Since 1994, he's released nine albums and the word "love" has been part of the title of five of them, including his last three albums, All For Love, In the Name of Love and Someone to Love You.

A blurb on the back of You Are My Lady boasts that this is "The sexiest, most sensuous CD yet from the #1 saxophonist in Smooth Urban jazz!" That might be true especially if you're into sluggish playing, uninspired and stock arrangements and "jazz" that's so smooth there's no edge to it at all.

If this is supposed to be the soundtrack for seduction, it should come with a warning sticker: "Caution: Do not drive, operate heavy machinery or engage in any activity that requires you to be alert and awake while listening to this album."

So Sick; Got to Give It Up; The Closer I Get To You; Flying High; Two Keys to My Heart; Secret Romance; You Are My Lady; East Coast Strollin'; Inseparable; I Want You Tonight.