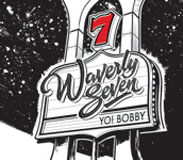 Yo Bobby!, the debut recording of the downtown New York jazz septet Waverly Seven, is a two-disc tribute to Bobby Darin, its twenty-four instrumental tracks all recorded by the late singer sometime during his career. Fueled by some of the best young players in town, the record is essentially a joyous, high-powered swing date, no more and no less; while the playing is faultless, there's little on it that'll make you turn your head or stop in mid-conversation. That said, Yo Bobby! does have its moments, most of them supplied by Anat Cohen and Joel Frahm, the group's ringer multireedists. Cohen—a native of Tel Aviv who earned her swing spurs playing in the Israeli Air Force Band—is particularly in her element here, and the supple sound of Cohen's clarinet and her saxophone's cry are among the record's most consistent pleasures.

Cohen impressed again at the Jazz Standard on March 15, 2007, when the Seven, augmented by guitarist Russell Malone, made its first club appearance. Playing to a sold-out house, the group tore through nine cuts from Yo Bobby! in its opening set with tremendous verve and high discipline. Loosed from the confines of the recording studio and egged on by the crowd, the band acquired a sharper edge: Its blues deepened, and Dixieland and Klezmer accents bubbled up and over as Frahm and Cohen wailed away, the entire group heading for the hills on nearly every number. (Malone, whose technique can shine with an off-putting slickness, sounded especially vital and driving in this context; perhaps this is the music he was born to play.)

Live, one could fully appreciate how well the group's skillful arrangers, all drawn from within, have done in getting the most out of the Waverly Seven's size; on tunes like Nat Adderly's classic "Work Song," it was hard to believe so much sound could come from anything less than a full-scale big band. Likewise, with singer-guitarist John Pizzarelli guesting on the set's closing tune, "Artificial Flowers," it became clear how little vocals are missed on this singer's tribute; using their reeds as their voices, Frahm and Cohen sing just fine.

CD1: Charade; A Nightingale Sang in Berkeley Square; Splish Splash; Nature Boy; Oh! Look At Me Now; I Guess I'm Good For Nothing But The Blues; Call Me irresponsible; In Love In Vain; The More I See You; I Can't Give You Anything But Love; That Funny Feeling; Artificial Flowers. CD2: I Can't Believe That You're In Love With Me; The Good Life; Work SOng; All the Way; I Wanna Be Around; Spring Is Here; Some Of These Days; Black Coffee; Mack The Knife; How About You; Skylark; It's You Or No One.