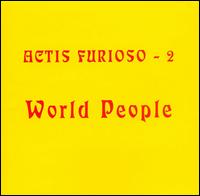 Carlo Actis Dato is a restless spirit. The composer, arranger and virtuoso of the baritone saxophone and bass clarinet is a traveler who picks up music and all of its nuances from different parts of the world. He brings this to bear in his compositions as he adds his unique vision and imagination to open a wide panorama filled with startling motifs and dynamics. Invention and surprise are the cogs around which he spins his web, drawing the listener into a whirlpool of free jazz, big band swing and folk music, all wrapped in a joyous buoyancy.

Actis Dato has a new version of Actis Furioso for World People. As with the earlier conglomerate, all of the members fit in well to give the music a deep dimension and impact. One can not presage the direction the music will take; the band is as apt to swing as to billow free phrases or march in tandem. Discovery is delightful indeed.

Fanfare from the baritone sax heralds the funeral march "Morto Che Para." It is all so solemn until the music cavorts with the horns singing the melody and Beppe Di Filippo undulating on the tenor sax. Actis Dato shows his wicked wit as folk music swings in, quite in contrast to the sentiment of the composition, which translates to "the dead speaking." He brings it all back home with a sedate tempo into which wriggle a few free phrases. The changes certainly rivet and show how various strands can be woven into one compelling whole.

Actis Dato's music is staunched by his non-conformist approach, with a flair for turning in extraordinary manifestations of idioms. His "No Visa" is a happy hunting ground and, once again, the music is ebullient into which he injects torqued bolts of free jazz in neat juxtaposition. He comes in on the baritone and leads the band into a swinging jaunt. The move between the idioms is seamless, testifying to the chemistry between the band members, without which the music would be the lesser.

The pace is slowed down for "Desaparecidos." Actis Dato brings in a poignant air on the bass clarinet. The melody is stunning and given such an elegant presence, stays within the initial parameters. Ivano Perino and Enrico Negro on trumpets and Gianpiero Malfatto are the progenitors of excellence along with Actis Dato.

Music is meant to charm and stimulate the listener. This CD does it in spades.