By DAN BILAWSKY
December 1, 2015
Sign in to view read count 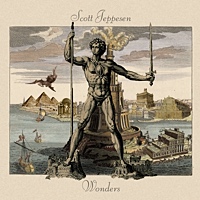 Ancient history and current times collide on the sophomore release from California-based tenor saxophonist Scott Jeppesen: with Wonders, he offers up an intelligent, semi-programmatic look at the Seven Wonders of the Ancient World as seen through a modern jazz lens.

Jeppesen, a once-upon-a-time protégé of saxophonist Joe Henderson and a jazz studies doctoral student at the University of Southern California, fuses his passion for history with some serious composing and playing chops. Descriptive writings and drawings documenting each of the Seven Wonders of the Ancient World served as his guide, leading him to create music that often reflects, analyzes, and/or glorifies those larger-than-life creations. But he does so in level-headed fashion, using the nature of each one of those man-made marvels as a springboard, not an excuse to indulge in musical excess. With the assistance of some of the West Coast's finest—guitarist Larry Koonse, pianist Josh Nelson, bassist Dave Robaire, and drummer Dan Schnelle, all of whom appeared on Jeppesen's El Guapo (Creative Bottle Music, 2013)—he's able to use music to capture the spirit of some of man's greatest achievements. In other words, Wonders is the art and architecture of antiquity reborn as the sound of today.

"Hanging Gardens (Of Babylon)" opens the album and highlights the grandeur of its namesake through its drive, surging melodic spirit, and rhythmic strength. It brings a certain degree of clarity to the one wonder that's existence has repeatedly been questioned. "Last Man Standing (Great Pyramid Of Giza)," on the other hand, is a musical picture of the only one of the seven that remains. It's a sly and stealthily moving work enhanced by Nelson's outward bound keyboard work.

While certain aural aspects of these pieces naturally mirror the accepted or assumed visual nature of the constructs that served to inspire them, Jeppesen doesn't always take the expected path(s). On "Colossus (of Rhodes)," for example, he values mystery over magnificence, balancing uncertain thoughts with grounding musical ideals. Each one of his complex-yet-accessible creations manages to speak in different ways. "The Marble Tomb (Mausoleum at Halicarnassus)" finds a happy balance between astral spirits, brooding thoughts, and balladic ideals; the odd-metered "A Guiding Light (Lighthouse Of Alexandria)" pleasantly roams along at a comfortable clip; "Big Daddy (Statue Of Zeus At Olympia)" struts, swaggers, and swings with precision and purpose; and "Artemis (Temple Of Artemis At Ephesus)" allows the sun to shine through.

Three other pieces—the flowing, waltz-ish "Pillars Of Sand," the contemplative-turned-swinging "Hubris," and the loose-limbed, swing-centered "Shaken" (with guest tenor saxophonist Bob Sheppard)—fill out the album and help to further Jeppesen's strong vision.