By JEROME WILSON
February 4, 2019
Sign in to view read count 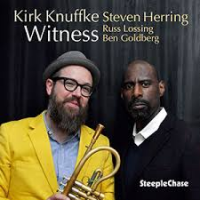 Kirk Knuffke has brought his cornet skills to a lot of different music in his career. As a leader, he has recorded albums dedicated to the work of Erik Satie and Don Cherry and he's even covered an Ernest Tubb song. This album gives a greater picture of how wide his interests stretch as he delves into a program of spirituals, operatic arias, poetry and pop and jazz standards, leading a quartet of clarinetist Ben Goldberg, pianist Russ Lossing and, most crucially, classically-trained baritone singer, Steven Herring.

Herring's commanding, resonant voice is a focal point of this music. He can perform as a romantic crooner, gospel shouter or opera singer as well as integrate himself into the fabric of the instrumental byplay. On the old spirituals "Witness" and " A City Called Heaven" he creates a passionate religious feeling while Knuffke's and Goldberg's snaky lines surround him like a backing choir. A third spiritual, "Ride On, King Jesus," is played as a frenzied four-way race. Herring bellows the lyrics swiftly as the cornet and clarinet howl and Lossing scrambles an agitated piano line along the bottom. The opera excerpts highlight Herring's vocal power in front of more formal instrumental accompaniment. On Verdi's "Iago's Credo," Knuffke and Lossing creep ominously under the singer, while on Verdi's "Aria Mustafa" they exchange short, lyrical phrases in his support. On Puccini's "Questo Amor" they soar over Herring's swooning voice as Lossing's piano decorates the background.

"Lush Life" and "Charade" come off as moody ballads with emotional singing, melancholy piano; Knuffke is particularly mellow and reflective. The poetry settings get a bit theatrical. On Carl Sandburg's "Subway," Herring sings the words over murmuring piano as Knuffke peals and Goldberg ponderously stalks. Thomas Hardy's "The Voice" is turned into a soothing lullaby and Kirby Congdon's "Storm" is set to a cloud of ominous notes and phrases that congeal into a creepy setting for Herring's stark recitation. In addition to all this, there is a version of Sun Ra's "The Satellites Are Spinning" worthy of the Arkestra itself, a collage of cornet pops, clarinet moans and piano fragments that decorate Herring's dramatic blend of recitation and singing.

This is a fascinating showcase for Kirk Knuffke's versatility. He can apply his cornet to a dazzling variety of settings and he has an amazing vocal partner here in Steven Herring. This album is a compelling blend of drama and art song with sassy jazz flavoring that sounds like nothing else out there.