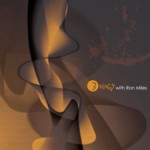 This album is appropriately titled as, in many cases, the addition of another musician raises the level of an entire band's playing. So it is on this session, where Denver-based cornetist Ron Miles joins Colrado's 3ology combo. Evident from the one track on which Miles isn't featured, 3ology—brothers Doug and Tim Carmichael (alto sax and bass, respectively) with Jon Powers on drums—are the sort of jazz-jam band that exists most places in North America; groove-makers whose forté is performance, not profundity. But the presence of Miles, who worked with saxophonist Fred Hess and guitarist Bill Frisell, supplies a new dimension. With an attack that bounds from midrange lyricism to atonal puffing and triplet exposure, the brass man suggests that 3ology can transcend the funk. Miles benefits as well, the sugary strategies he sometimes exhibits banished by this trio interaction.

The standout track is "Nightmares of My Youth," a group composition that is positively avant-garde. With tympani reverberations, below-the-bridge bass scraping and a distracted reed line in its exposition, it reaches critical mass with double-counterpoint horn lines. Moving from Don Cherry-like blowing atop a bowed bass line, Miles' invention solidifies the tune's development as a moderato melody, completed with a twang from bassist Carmichael.

Tim Carmichael's guitar-like facility serves him well elsewhere as does his steady timekeeping, often joining Power's brawny backbeat. As for Doug Carmichael, he can reed bite, flutter-tongue and chirp stridently when challenged, as he is by Miles' contrapuntal slurs on tunes such as "Gonna Leave A Mark" and "Back in Hotchitakee." He does, however, have a tendency to lapse into overdone mellowness.

With Ron Miles proves that interesting music can be produced from unheralded players if the right circumstances are evoked. Whether it's a one-off or a rethinking of 3ology's usual style is something only the trio members can decide.

Ken writes about improvised music in Toronto at Jazzword.com.